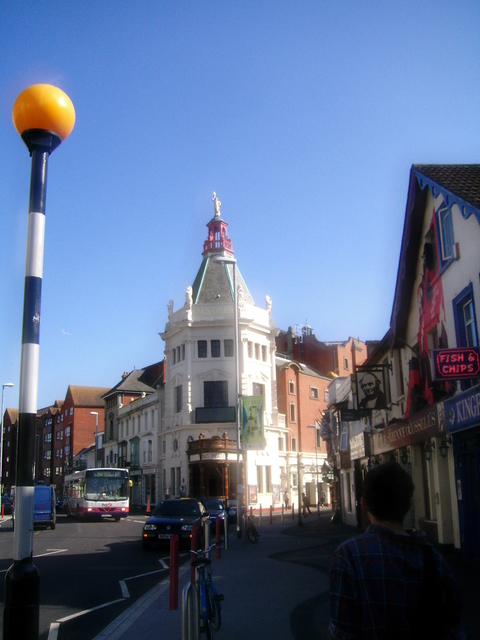 The Kings Theatre, in Southsea an adjacent town to Portsmouth, Hampshire, was designed by noted theatre architect Frank Matcham, and it remains one of his least altered theatres. It opened on 30th September 1907 and was built as a legitimate theatre (as opposed to a music hall) with a fine large stage. It has three balconies and the unusual feature in this venue is that the top level overhangs the lower two. The Edwardian Baroque style plasterwork is stunning and the house is remarkably intimate for its 1,450 capacity (originally this was 2,167).

Despite the lofty aims of the original owners, the Kings Theatre soon became a variety house and films were part of the fare. In 1921 a projection room was constructed at the rear of the balcony and a full cinema programme was screened in the afternoon, with twice nightly variety in the evening. From 1931 (before the Theatre Royal Portsmouth), the Kings Theatre became a full time cinema, but the talkie season was shorter lived than the nearby Theatre Royal and the Kings Theatre returned to live use shortly after the Theatre Royal became a cinema in 1932. The projection room still exists and is now used for technical staff. Intriguingly, there are plans being investigated for films, not Hollywood fare, to be screened once more as part the the programming.

Like the Theatre Royal, the Kings Theatre fell on hard times, albeit somewhat later. It struggled through the latter part of the 20th century, often making a loss and with little or no money to maintain the building. All seemed lost when the J.D. Wetherspoon chain indicated they were to turn it into on of their massive pubs. This news galvanised action from locals and a Save The Kings campaign was launched which resulted in Portsmouth City Council purchasing the building and leasing it to a trust to run. Since then a phenomenal amount has been done to restore the building, which in 2009 in looking resplendent with a long lost statue restored to the roof above the entrance. A digital projector was installed in early-2011, and occasional films are now being screened.

The Kings Theatre is designated a Grade II* Listed building by English Heritage.

My first visit to this beautiful theatre was in 1962 whilst on holiday in Southsea. The play was ‘Rattle Of A Simple Man’ – the stars were Sheila Hancock and Edward Woodward. The Kings is a beautiful theatre and thank goodness another of Matcham’s gems has been saved.