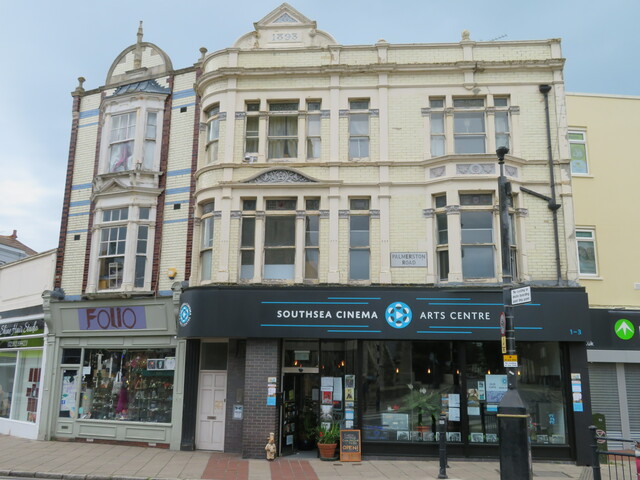 In Southsea, the coastal resort near Portsmouth, Hampshire, for at least 12 years, Portsmouth Film Society had been presenting films at venues as diverse as the University of Portsmouth, local churches and the King’s Theatre (see separate Cinema Treasures entry) and at outdoor locations, including drive-in screenings.

On 19th May 2022 the Society’s dream project, its permanent base at the Southsea Cinema & Arts Centre, was formally opened by the Lord Mayor. The ribbon-cutting ceremony at 6.30pm was followed by a reception attended by local MP Stephen Morgan, community leaders, local artists and business leaders. During the day, there had been an Open House for the public, from noon to 5pm, featuring local performers, short films and other activities.

In addition to the cinema, there are also meeting rooms, a café and educational areas.

The Society intends to screen a “variety of genres”, to appeal to all ages, with matinees and daily evening screenings funded by the British Film Institute.

Run as a not-for-profit enterprise, it also aims to encourage film-making and film-related job creation in the area.

The majority of the financing for this £100,000 community project was raised through arts grants, but the society raised a very commendable £25,000 through crowd-funding.

I visited the Southsea Cinema & Arts Centre on Sunday 19th June 2022 for a screening of Pedro Almodovar’s drama “Parallel Mothers”.

This is a fascinating venue. The ground floor area is all one space, with the auditorium on the right, in an area that is curtained-off for the film shows. There is a small café seating area at the front, and the box office and concession counter are to the left.

The stated seating capacity of 40 is something of a nominal number. For the show I attended there were four rows of four free-standing chairs with a large number of bean bags and cushions in front of those chairs. This produced a real ‘film society’ atmosphere, with many members of the audience lounging on the bean bags and cushions!

Projection is from DVD/Blu-ray (mostly the latter) so films only available in these formats can usually be screened. However, links have been established with a number of streaming services and, indeed, “Parallel Mothers” was screened from Amazon Prime.

Judging by my visit, this is a well-run venture which is quickly building up a large, regular clientele. I wish the Southsea Cinema & Arts Centre all the very best.