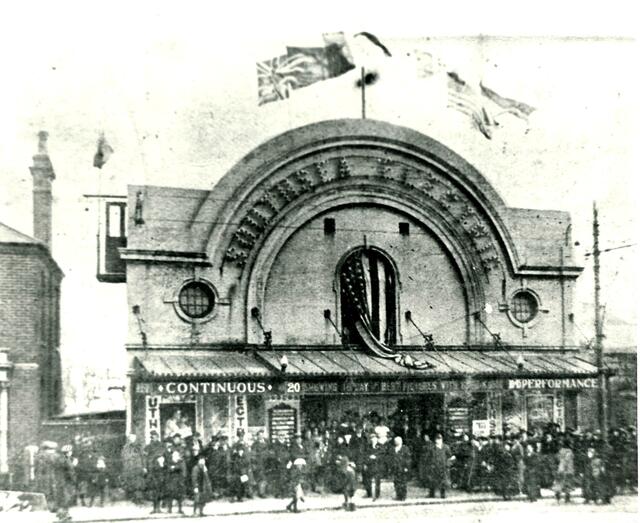 Situated in Southsea, adjacent to Portsmouth, Southsea Electric Theatre opened on 31st October 1911, with seating for 750. It was operated by Mr F. Champion and had an orchestra under the direction of Harry Bruner.

On 24th December 1912 the licence was transferred to The Southsea Electric Theatre Co. Ltd. and, on 9th January 1926, the cinema was re-named The Fawcett Picture House. During the 1920’s balcony patrons at matinees were served complimentary tea and biscuits.

Disaster struck in January 1929, while equipment for the ‘talkies’ was being installed, and a fire broke out near the projection room. The cost of the damage was estimated at £3,000.

On 13th May 1930 it was re-named the Commodore Cinema. The position of the screen was altered; this, and other works, resulted in an increased seating capacity of 1,000 (653 in the stalls and 347 in the balcony). Those other works included, on 30th June 1930, the installation of a Dekker organ (a rarity in the UK; said to be the largest in Europe) which was opened by organist Peirson Webber from the USA. Later organists were Lew Harris and Tom Lynn.

On 12th July 1938 the licence was transferred to Southsea Entertainments Ltd. and following a remodel to the plans of architect Frank Ernest Bromige, the cinema was re-named yet again, becoming the State Cinema, reopening with Will Hay in “Oh! Mr Porter”. At this time the organ was removed. The seating capacity was now 999 (stalls 656, balcony 343).

The State Cinema closed on 12th November 1940 due to conditions during World War II.

On 24th December 1946, the building gained a new lease of life as Southsea’s newest ballroom, The Embassy. A ‘Grand Opening Ball’ was held on 31st December, starring Harry Roy and his Tiger Ragamuffins.

However, on 24th September 1954, a small advertisement appeared in the ‘Evening News’: The now-closed Embassy was available for rent as a store, or the freehold could be purchased.

The building was occupied by Admiralty Stores, a furniture retailer, but was later demolished. Embassy Court flats occupy the site.