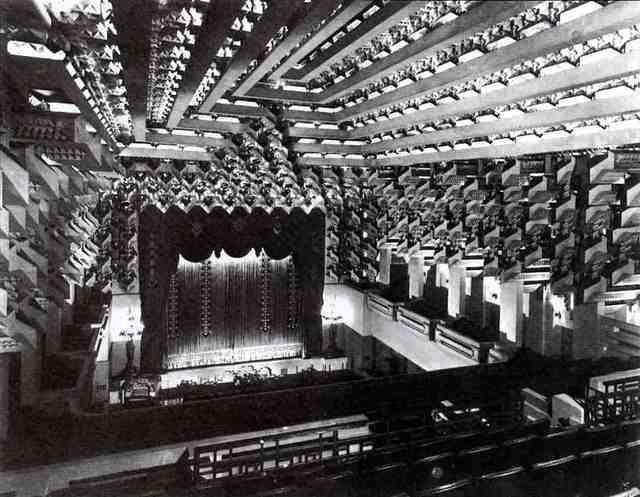 The Capitol Theatre is a classic Art Deco style theatre. The first picture palace to be built in Australia, the theatre was designed by Walter Burley Griffin and opened on 7th November 1924 with Cecil B. De Mille’s “The Ten Commandments”, which ran for 19 weeks, accompanied by an ‘Atmospheric Egyptian Prologue’ live on stage. The cinema was leased to Paramount Pictures Inc. It was equipped with a WurliTzer 3Manual/15Ranks organ that was opened by Horace G. Weber. Seating was provided for 2,137 (1,306 in the stalls, 633 in the balcony and 198 in loges and boxes)

Recognized in Australia and described by Australian architect Robyn Boyd as one of the most beautiful cinemas ever built, the Capitol Theatre is world reknown for its famous ornate plaster ceiling which conceals 4,000 coloured light globes, creating a crystaline effect.

Classified by Australian National Trust as a treasure, the Capitol Theatre currently awaits registration on the world register for significant buildings.

Hoyt’s took over the theatre in December 1940 and the seating capacity had been slightly reduced to 2,115. It really came into its own when the nearby Hoyt’s Regent Theatre burnt down in April 1945.

The theater was reconfigured in 1965, reducing seating capacity from 2,115 to 791 in the former balcony area which had been extended forward. The former stalls area and entrance foyer was totally destroyed and converted into a shopping mall.

The 3/15 WurliTzer organ was the catalyst for formation of the Theatre Organ Society, as it was sold to them in lieu of it being broken up for ‘spare parts’ by an organ builder. The Capitol Theatre’s WurlTzer organ is now installed in the Dendy Theatre, Brighton, a suburb of Melbourne.

The Capitol Theatre re-opened with 644-seats in the former balcony with a 70mm presentation of “The Great Race” starring Tony Curtis on 18th December 1965. Later taken over by Village Cinemas and then by independent operator Mike Walsh who operated it as an art house from July 1987, but this didn’t last long. Chinese movies began to be screened from 1992 through to 1997 when the Capitol Theatre finally closed.

It was purchased by the RMIT University in 1999 and since then they have been busy restoring the building and using the former balcony space as a lecture hall, with occasional film use. The shopping mall below, continues to struggle along.

A concerted effort in a five years $18 million restoration was finally completed in May 2019 and the magnificent Capitol Theatre reopened on 5th June 2019 with a reduced seating capacity of 504. Film Festivals will be its main public use and one of the first presentations will be “Viva Varda” a month-long retrospective season of the films of director Agnes Varda.

Nice picture must have been remodeled out side looks too new to be so old.

Not remodeled, all you see is authentic from 1924. The design of the Capitol Theatre was way ahead of its time.

Several early photos and a couple of drawings of the Capitol Theatre are on display at the web site of the Flaxman Library of the School of the Art Institute of Chicago. Use the name Capitol Theatre in the Keyword search box.

RMIT University who own the Capitol are currently undertaking repair rewiring and relighting of the auditorium ceiling. Will be fully operational by end of March 2013.

What a day in 1946 when it was my privalidge to become a Page Boy at this great theatre. The days of great films such as ‘State Fair’ and many others.The days of flowers in the foyer and Organists that perfumed the theatre with their grand music.Iam now a Filmmaker and have completed a documentary on the Capitol,including footage of its construction.Available by contacting:Wintergarden Films,<

9th November 2014: Over the last 12 months ( 2014) the Capitols famous ceiling has been completely rewired and relamped -that’s 4000 globes! New dimmers were also installed. The foyer has been recarpetted, seats were replaced a few years ago,and RMIT has undertaken much repair work including repair of plasterwork and repainting of the auditorium. In short the auditorium is looking wonderful. The Melbourne International film festival used the Capitol during it’s festival in July/August of this year. Unfortunately, the cinema has now CLOSED on a semi permanent basis as RMIT has relocated all the lectures to a new building and the theatre is no longer available for hire. Rumours are that it is up for sale. More to come .