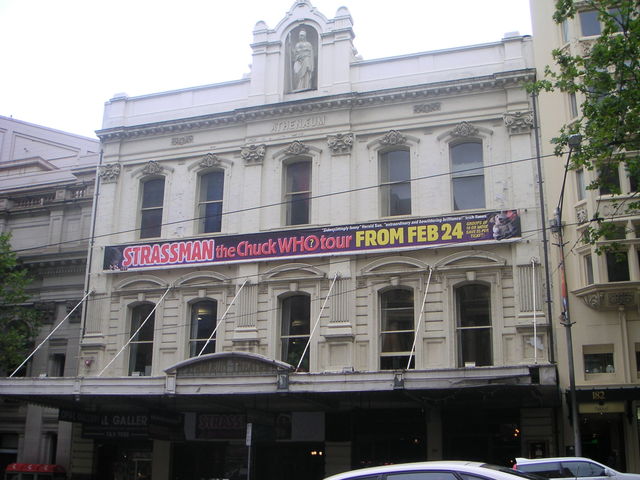 Built as the Mechanics Institute and library in 1842, it contained a library, a reading room and a hall where the council met. By 1857, two single storey wings had been added to the façade.

In 1872 a new hall designed by architect Alfred Smith was opened as the Melbourne Athenaeum and the current three storey building next to Melbourne Town Hall was built in 1886. It was the first building in Australia to screen films, which occurred in October 1896. The upper hall was converted into an art galley in 1910, and the main hall was converted into the Athenaeum Theatre in 1921 to the plans of architect Henry Eli White. The current theatre combines the 19th century configuration with later style plaster decoration. The foyer is in an Art Deco style and the pressed metal awning was added to the façade in 1924. Seating is on three levels, stalls, lounge and dress circle.

Many international actors appeared on the stage of the Athenaeum Theatre and it was the first Australian theatre to screen ‘talkies’, when on 2nd February 1929 Al Jolson in “The Jazz Singer” had its Australian premiere here.

The Athenaeum Theatre was controlled by Frank Talbot Pty. Ltd. from the early-1920’s until January 1955, when it was leased to Hoyts Theatres. In July 1967, Hoyts Theatres took over control of the theatre. It was was known as the ‘home of British films’ in Melbourne, many of which had long runs at the Athenaeum Theatre. It was closed a a full time cinema on 4th April 1970 with Dustin Hoffman and Mia Farrow in “John and Mary”. Live theatre use began, but this initially failed and films returned again. The final films to hit the screen at the Athenaeum Theatre were John Hargreaves in “Death Cheaters” and Terence Hill in “Blackie the Pirate” (Il Corsaro Nero) on 17th January 1977.

Since then it has been in use as a live theatre. The Institute still operates from the rest of the building, serving its original purpose as a meeting place, library and venue for special occasions, exhibitions and performances.

The Athenaeum Theatre was restored in 2010 when new seating and a large orchestra pit was installed. It is listed on the National Trust Register. It is directly across Collins Street from the Regent Theatre & Plaza Theatre.

Information regarding the Frank Talbot and Hoyts connection with the Athenaeum were supplied by Trevor Walters.

The Athenaeum Theatre had showed the world premiere of The Story of the Kelly Gang(the world’s first full length motion picture) in December 1906.

The first movie screening in Australia(a short film or(?films?) Was in this hall in october 1896.