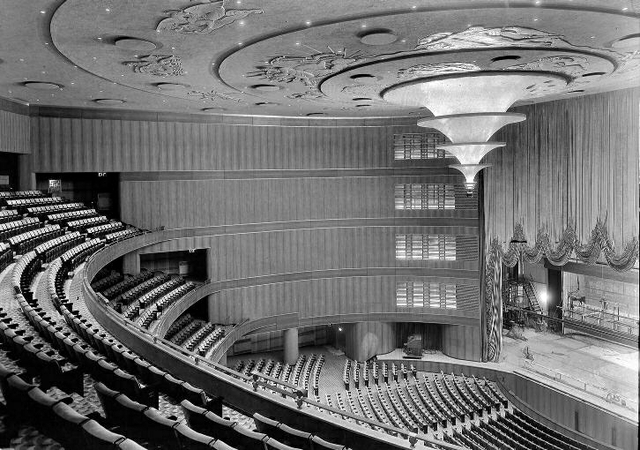 Known for most of its short life as the Center Theatre, this Art Deco style movie palace at 6th Avenue and 49th Street was owned by the Rockefellers and was built in the South Block of Rockefeller Center. It opened as the New RKO Roxy Theatre on December 29, 1932 with a stage show and the movie “The Animal Kingdom” starring Leslie Howard and Myrna Loy. Two days earlier, its larger sister theatre, Radio City Music Hall, had opened with a stage show only policy, again under the direction of ‘Roxy’ Rothafel.

The lobby had three ticket offices. The Grand Foyer was illuminated by day through five large exterior windows of opaque glass etched in relief. During darkness, the lighting was via three glass globes at ceiling height and two glass globes hanging lower. It was decorated in red and gold fabric with Bubinga mahogany walls and vermilion doors leading to the auditorium.

The auditorium had 75 foot high walls which were African mahogany paneled and a ceiling decorated with figures from Greek mythology. Centered over the orchestra section was a 400 bulb, 104,000-watt chandelier, 25 feet in diameter and a weight of six tons. Claimed as the largest of its kind, the fixture required its own fan cooling system. The proscenium opening was 60 feet wide and extended in height from stage floor to the ceiling. Like Radio City Music Hall, the New Roxy Theatre had three shallow mezzanines, with respective seating capacities of 406, 655 and 559. The orchestra accomodated 1,890 giving the theatre a total capacity of 3,510. Like the Grand Foyer at Radio City Music Hall, the New Roxy Theatre had a wide staircase and elevators to the top mezzanine, and a Grand Lounge in the basement. The theatre was equipped with a Wurlitzer organ of 4 manuals, 34 ranks which was opened by organist Betty Gould.

After successful litigation by the owners of the original Roxy Theatre on 7th Avenue and 50th Street, the theatre was re-named the RKO Center Theatre on December 22, 1933 and it began to feature less costly second-run double bill film programmes. In 1934 RKO was dropped from the Center’s name when it opened its first legitimate production, “The Great Waltz”. When the show closed, the Center Theatre attempted showing films again. In February 1940, it hosted the New York premiere engagement of Walt Disney’s “Pinocchio”. Movies did not succeed here, and the Center Theatre returned to presenting live shows, including some ‘Ice Spectaculars’, until it closed and became an NBC studio in 1950.

In May 1954, NBC’s lease expired and a decision had already been taken to demolished the theatre. The theatre was demolished in 1954, so that an office skyscraper (built to ‘blend in’ with the rest of Rockefeller Center) could be constructed on the site.

That was the norm. They did the same thing with the RKO Colonial on Broadway in Manhattan where I saw Steve Allen. Believe the same for the Ed Sullivan.

As the son of the architect, Edward Durell Stone, as well as the author of his upcoming biography, “Edward Durell Stone: A Son’s Untold Story of a Legendary Architect” being released by Rizzoli in October, I am eager to dispel a few myths contained in the postings below.

At the relatively young age (for an architect) of 29, Stone was made the architect-in-charge of both the Center Theater and the Radio City Music Hall. This fact is acknowledged not only in my father’s 1962 autobiography, but in the biography of one of Rockefeller Center’s lead architects, Wallace K. Harrison, written by Victoria Newhouse. This information is well-established and can also be found in other sources. In fact, Harrison later characterized Stone as one of “the three great designers at Rockefeller Center.”

Re Tinseltoes comment, kinescopes of “The Voice of Firestone” show a large audience on the main floor of the theater. Many seats may have been removed to accommodate the cameras and lights but there were many rows of folks seated downstairs. Likewise, remember skits in “Your Show of Shows” where the performers ran into the audience? Most memorably when they pulled Sid Caesar kicking and screaming out of his seat and pulled him onstage for “This Is Your Story” lol – hysterical! Cheers.

Also – Ed Sullivan every night looked into the theatre and pointed out the celebrities in the audience. All seated downstairs, close to the stage.

Mark, Ed Sullivan didn’t broadcast from the Center, but from the theatre on Broadway which now bears his name. In the day, I believe, it was Hammerstein’s.

Right. I didn’t make my point clearly. I wasn’t suggesting that CBS’s Ed Sullivan bcast from the Center, just that he had his audience downstairs and close to the stage also.

If you want to see some great photos of this place, find a library with a copy of American Architect December 1932. It has a multi page spread from when it was still the RKO Roxy. Lots of great detail shots of things like the ashtrays, drinking fountains, and various lounges.

The Center was certainly fabulous. Many years ago, information was posted about the Center’s 4 manual/34 rank Wurlitzer. I found some detailed information about it (and many other New York City theaters) on the city American Guild of Organist’s website. (http://www.nycago.org/Organs/NYC/html/CenterTheatre.html) I heard the Center organ many when it was owned by Jimmy Boyce … had a chance to play it, but never got around to it.

The Center’s final movie booking was Walt Disney’s “Pinocchio,” which opened in early February 1940 and closed on March 31st after a run of seven weeks and four days. The booking had been extended due to Easter Sunday falling on March 23rd that year. The Center drew substantial family attendance during the holiday period. Following “Pinocchio,” the Center became home in May-June to a season of Fortune Gallo’s San Carlo Opera Company, and then shuttered for conversion to ice-skating spectaculars, which started in October with “It Happens on Ice.”

Mr. Hicks' “setting the record straight” is authentic and factual; he ought to know! I would only add that there is also a difference in the professional terms “interior decorators” and “interior designers.” In the case of the Music Hall and the RKO Roxy (Center), although this professional term was relatively new, Deskey and even moreover, Schoen belonged to a new group of talented designers who worked more closely with their architectural environment. Without them the success of both theatres would have been aesthetically limited. Both men paved the way for the term “interior designer”–a profession I followed for forty years. While I have the floor, it is also high time that Edward Durell Stone got his due. I hope that I have brought a certain illumination to his incredible talents with my new book: “Epic of the Center: A Theatre’s Words, Music and Wurlitzer,” available on Amazon.com.