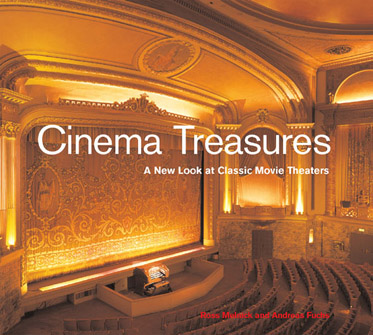 More than 100 years after the first movie delighted audiences, movie theaters remain the last great community centers and one of the few amusements any family can afford.

Cinema Treasures (MBI Publishing, 2004) examines the cultural and industrial history of theatrical motion picture exhibition in the United States from the nineteenth to the twenty-first century.

Authors Ross Melnick and Andreas Fuchs trace the history of the American film exhibition industry, the movie theater’s architectural and programmatic changes, and how moviegoing has remained an essential leisure activity for over a century despite technological, artistic, political, and cultural change.

Period photographs from archives such as the Academy of Motion Picture Arts and Sciences and movie theater ephemera sourced from private collections complement this informative and engaging history.

Also included are more than two dozen profiles of classic movie theaters that have been restored and renovated and (at the time of its publication) still exhibit motion pictures. Each of these two-page spreads is illustrated with historical and contemporary photographs.

Cinema Treasures was the recipient of the 2005 Theatre Historical Society of America’s “Book of the Year” award and the “Silver Award” for Popular Culture from Foreword magazine. The book is now in its second printing.

Buy this book on Amazon»