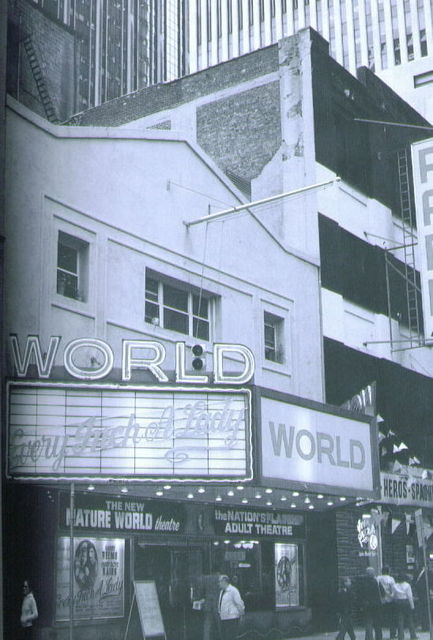 When it opened in 1914, the Punch and Judy Theatre was tiny compared to some nearby theatres, seating just 299.

It was built for actor-turned-producer Charles Hopkins by the firm of Murray & Dana, who designed the intimate theatre in Old English style, complete with a mural of the theatre’s original namesakes fighting it out on the façade overlooking West 49th Street.

The small lobby resembled a 16th Century English pub, and when it first opened, the staff was attired in Elizabethan costume. Inside the eighteen-row auditorium, its seats were once long benches upholstered with black leather. On the mezzanine level, boxes seating two-to-six people each ran down the length of the side and rear walls.

The ceiling was crossed with dark, thick wood beams, and its walls coated in plain white plaster. Medieval-style chandeliers hung over the auditorium with lights which resembled candles.

For a small theatre, the Punch and Judy contained a full-size stage and tall proscenium arch, and its curtains carried on the Old English theme. Antique French tapestries also hung from the side of the stage. The auditorium was loosely modeled on the Blackfriars Theatre in London.

The theatre’s first production was not a hit and its first decade or so in operation, the Punch and Judy managed to have just a couple of modest successes.

In 1926, Hopkins had the theatre renamed for himself, and the theatre slowly became a bit more successful. A handful of long runs lasted into the early-1930’s, but with the Depression, Hopkins was no longer able to keep the tiny house open any longer – at least not with legitimate performances. The theatre’s final live act was in spring of 1932.

In 1933, Hopkins started to lease out his self-named theatre as a movie house. A year later, the name was changed to the Westminster Cinema, and screened British films only. In 1936, it became the World Theatre, showing foreign films. After World War II, it was showing a mix of foreign and second-run features.

By the 1960’s, the area around the World Theatre had taken a turn for the worse, and many of its neighboring theatre’s started to show adult films to stay in business. The World Theatre followed suit in 1972, with the New York City premiere of the notorious “Deep Throat”.

The Embassy 49th Street Theatre remained open another handful of years, screening mostly first-run films, until soaring property costs made the land which the theatre sat on far more valuable than the old theatre itself. It was closed on April 30, 1987 with Walt Disney’s “The Aristocats”.

The Embassy was demolished later in 1987, to make way for the Holiday Inn Crowne Plaza, despite the fact that its charming and unique original Elizabethan-style décor was still mostly intact and in fair shape inside.

Roger, I have no idea if they were ‘hetero’ or even women at all. That would not have bothered me in the least.

I think i remember you from the Hollywood Cinema board early last year.

I have come across a 4 page advertisement for the World Theatre dated May 27th, 1944 for “Goyescas” an R.K.O. picture. If anyone is interested in purchase or donation this flier is in mint condition. Thanks. Contact me at

I used to work nights in New York occasionally in the early 80’s and part of my job was to get dinner for the other workers at the company. (I had the least seniority) I used to walk down 49th street to Time Square to get the food and would pass by this theater. What was interesting to me was it seemed like a regular ‘legitimate’ theater, (clean, well maintained) not like the hole in the wall adult theaters on 42nd street. I remember one of Seka’s movies playing there for a while. (Inside Seka, Rockin’ with Seka, one of those films) It was several years later that I found out that it had been a ‘legit’ theater 20-30 years prior to that time.

A “legit” movie theater, yes, but it always did play the offbeat, foreign language, and somewhat sensational motion picture fare; its eventual move to hard-core adult films was not surprising or unexpected.

Yes after it was cleaned up I saw Bambi here. Seriously.

Guodone- a belated response to your comment. The bulk of the theatres on 42nd Street started life as legitimate theatres. Grant you some appeared to be holes in the wall because only the entrance was on 42nd Street, not the full width of the theatre. The garish cutouts they had at the entrance really changed the appearance. I recall walking past some of the scantily clothed images on a cold winters day and shivering at the sight.

Please update, theatre closed as the Embassy 49th Street on April 30, 1987 with The Aristocats