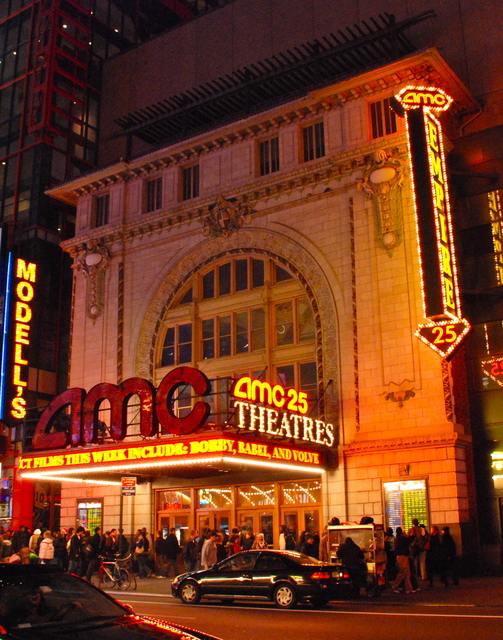 Originally located at 236 W. 42nd Street. The Empire Theatre was the eighth theatre on W. 42nd Street and was built for producer Al H. Woods who chose architect Thomas W. Lamb to design the theatre. It was opened on September 11, 1912 with the melodrama “Within the Law” as the 880-seat Eltinge 42nd Street Theatre. Seating was provided in orchestra, two balconies and eight boxes. Named for Julian Eltinge, the top female impersonator of the American stage, who was Woods star performer. Julian Eltinge never played in the theatre named after him. The opening attraction at the theatre was a huge success, playing for 541 performances. Other hits include John Barrymore in “The Yellow Ticket”, “The Song of Songs”, “Fair and Warmer”, “Up in Mabel’s Room”, “The Girl in the Limousine” and “Ladies Night”. “Blackbirds of 1928” was another hit. Laurence Olivier in “Murder on the Second Floor” only managed to play for 45 performances in 1929. Alice Brady & Clark Gable in “Love, Honor and Betray” played in 1930 to be followed by its final legit production “First Night” presented in 1931 for 88 performances. It then reopened as the Eltinge Burlesque Theatre, featuring burlesque & ‘talkies’. It was later renamed Empire Theatre.

Converted into a movie theatre in summer of 1942, first as the 759-seat Laffmovie Theatre screening short comedy movies and cartoons. That lasted until 1953 when it was renamed the Empire Theatre again and returned to feature movies. The theatre finally closed, seemingly for good, in the mid-1980’s.

The lobby of this luxurious, five-level theatre has been built inside the shell of the old Empire Theatre. On March 1, 1998 in order to build the massive multi-screen complex, the Empire Theatre was lifted up and moved down the street (all 3,700 tons of it) to its present location. Once that massive job was completed, a new 25-screen theatre was built around it and contained 4,916 seats. The multiplex was designed by the architectural firm Beyer Blinder Belle, and opened April 21, 2000. An IMAX screen opened on September 26, 2008, the first digital IMAX in New York City.

The historic façade has been left largely intact, while a new marquee has been added. Just above the box office is a beautiful mural depicting Julian Eltinge, originally painted by a French artist, Arthur Brounet. The mural was restored by Harriet Irgang, the director of Rustin Levenson Art Conservation. Initially, the former balconies were reopened as the Times Square Café, but this has been closed for several years and the space is currently unused.

Many considered this location to be AMC’s flagship operation.

Don’t understand why AMC can’t due a upgrade of theatre complex. This theatre open 6 months after E-walk. This theatre only got an IMAX, DOLBY and PRIME upgrades. Regal did 3 renovations on E-Walk across the street.

wow, there’s so much bad grammar and misspellings in that vitriol.

Screen X is proprietary to Regal in the States. I don’t really believe many (if any) AMC complexes have theatres for 4DX or DBox.

So what exactly should they do?

First, I didn’t say anything about AMC getting Screen X, Screen X is a format that also used in CGV Cinemas. The remaining 22 screens need to seats and the restrooms are not as maintained as Regal.

I agree that the megaplex is due for a major renovation. From what I’ve seen from photos from Google Maps, AMC Empire 25 has not replaced their seats in their non-Prime/Dolby auditoriums. The IMAX was also only a retrofit of one of their larger auditoriums, meaning it’s smaller than AMC Lincoln Square’s and it has a single laser system. I see two solutions for what AMC could do to save this theatre. One, they replace their rocker seats with recliners and update the 2000s decor like what they did to other cinemas. Two, cut their losses and close the cinema for the developer to repurpose and surrender to the better-maintained Regal E-Walk across the street. I know the latter is unlikely to happen, but does anyone else agree that this cinema is due for a major upgrade?

SAVE the theater? The E25 is reputed to be the highest grossing theater in the U.S. I’m glad the E25 (and the Lincoln Square) doesn’t have recliners in most of the auditoriums (although there are some auditoriums where their seats do need to be fixed or replaced). Recliners reduce the seat count to ridiculously small levels and when they construct it with a center aisle, there’s no ideal seat.

There’s at least 8 screens with fewer than 100 seats. With recliners, they’d probably only have 50 seats each.

The E-Walk once had 3276 seats and now, with their two best screens, #12 and #13 being closed due to renovation, the seat count is down to just 932. Word is that one of those auditoriums is going to be the new 4DX auditorium. The lobby of the E-Walk is being destroyed to make room for some crappy retail.

What I’d like to see the E25 do is to take either screen #14 (currently 301 seats) or another screen they have with 351 seats and make a second Dolby screen. There’s a lot of films released in Dolby that never get played in NYC in that format because all the AMC’s with a Dolby screen play the same film.

Whenever I’ve been at the E25, the bathrooms have been very clean. I will say that the hallway decoration at the E-Walk is nicer. Also, the elevators are almost always not working at the E25 and taking the escalators up from the entrance lobby to the theater level is narrow and ugly.

Spotted some rolls of carpeting near the entrances to screens 11/12 and 16/17, but, yeah, they are overdue to re-seat the auditoria. I like the idea of putting recliners in some of the larger screens. Even for popular movies the crowds book the PLF screens in advance, while 9/12/13/14/17 go begging for customers. Prime might be a better choice than Dolby Cinema because the contractual PLF bookings usually give AMC some flex with Prime. The two TG: Maverick screenings a day on Prime here are the only Manhattan PLF showings while the dinosaurs chow down.

Saw Top Gun Maverick in AMC PRIME, the sound and picture was better then Regal in Regular. Right now, the RPX screen is closed for remodeling.

Photos are posted in the photos section

Ridethectrain, this is not the website for technical specifications, but unfortunately, nowhere seems to explain. I’m thinking AMC Prime has Dolby Atmos surround sound but not Dolby Vision picture quality? Here in Philadelphia the downtown AMC Fashion District has both Dolby and Prime auditoriums. I’ve only seen one movie so far in Prime, but many in Dolby.

according to AMC website, the empire now has the Laser at AMC