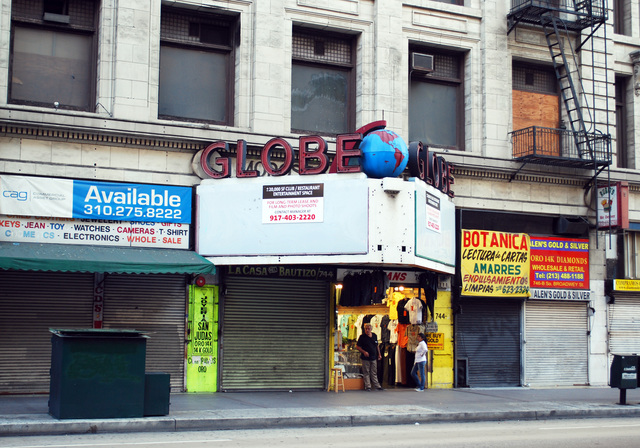 Located in the Garland Building and opened as the Morosco Theater by Los Angeles based producer Oliver Morosco on January 6, 1913 with the comedy play “The Fortune Hunter” by Winchell Smith. Designed by architectural firm Morgan, Walls & Morgan, with in interior designed by Alfred F. Rosenheim, the Morosco Theater was conceived not as a vaudeville house or nickelodeon, but as a elegant dramatic play house, which, among other special touches, included special rows of seats that accomodated portly patrons who weighed more than 200 pounds. Seating was provided in orchestra, balcony and upper balcony levels. Morosco also filled the orchestra pit with foliage rather than rather than having patrons yell over loud intermission music, which Morosco deemed an intrusion.

In 1928 producer Henry Duffy leased the theatre and it was renamed President Theatre. Among the actors who appeared on the stage at this time was Edward Everett Horton. In 1930, Fox West Coast Theatres took control and equipped it for motion pictures. On August 10, 1938 it became the first continuous newsreel theatre in Los Angeles, having been renamed Newsreel Theatre. The seating capacity was given as 1,177. By 1941, Sol Lesser’s Principle Theatres Corp. of America were operating it as the President Theatre again. Some minor alterations were carried out to the plans of architect S. Charles Lee in 1945, probably the marquee we see today was added at this time. Metropolitan Theatres took control and it was renamed Globe Theatre. The upper balcony level with its wood bench style seating was closed off, and the seating capacity was reduced to 782. The Globe Theatre continued for many years as a 3rd-run house showing double-bill programs at bargain prices. In 1958, a Mexican wax museum opened in the basement to supplement the Spanish-language programming which had begun to be screened upstairs. The Globe Theatre was still screening Spanish language films when it closed February 18, 1986.

In 1987, concrete was used to level the floor from the lobby to the stage, so that a permanent indoor swap meet could supplant what had once been the first serious playhouse in Los Angeles. The swap meet occupied the building for many years.

By June 2002, the auditorium had been converted into a techno-dance nightclub, while the lobby continued to house retail businesses. By 2005 it had become Club 740 nightclub which was entered from the rear of the building beside the stage, and was closed down in 2011 after shooting incidents.

The building was taken over by new owners and in 2014 work began on a restoration to house an up-market nightclub. The interior of the building is intact (apart from the level concrete floor), and the lobby has been refurbished to provided a mirrored entrance to the new nightclub/live music venue, which opened in August 2015. The restoration topped $5,000,000 and work will continue on the balcony level through mid-2016. Besides serving as a music venue, the Globe Theatre is a rental facility available for film shoots, private parties, charity events etc.

For now just has a promo video and contact info.

Their facebook page (https://www.facebook.com/globetheatre.la) still indicates opening 2015 and has good photos and links.

The Ghost sign David uploaded advertised the Tower Theatre “Corner of 8th and Broadway,” which was renamed the Newsreel Theatre in 1949 and kept that name until 1965. But I wonder if the sign might have originally been painted earlier to advertise the Globe when it was called the Newsreel (through most of the 1940s,) and the part of the sign giving the location was later repainted to reflect the change?

The globe decorating the Globe’s marquee was installed, along with the triangular marquee itself, during the period when the house was showing “news of the world,” but it probably suggested the new name of the theater when the newsreel operation was moved to the Tower in 1949.

I’m not sure if my memory is accurate at this late date, but I have a vague impression of having seen the globe on the marquee actually revolving. This probably would have been around 1950 or so, if I actually did see it. There are historic photos of the house in which the globe displays parts of the world other than the Americas. In this 1940s photo on display at the Globe Theatre page of Bill Counter’s “Downtown Los Angeles Movie Theatres” web site, the globe is showing Africa and the near east, with the Red Sea easily identifiable.

What appears to be the marquee for this theatre shows up in a couple of scenes in the movie: “The Dark Tower.”

This opened on January 6th, 1913. Grand opening ad and article below 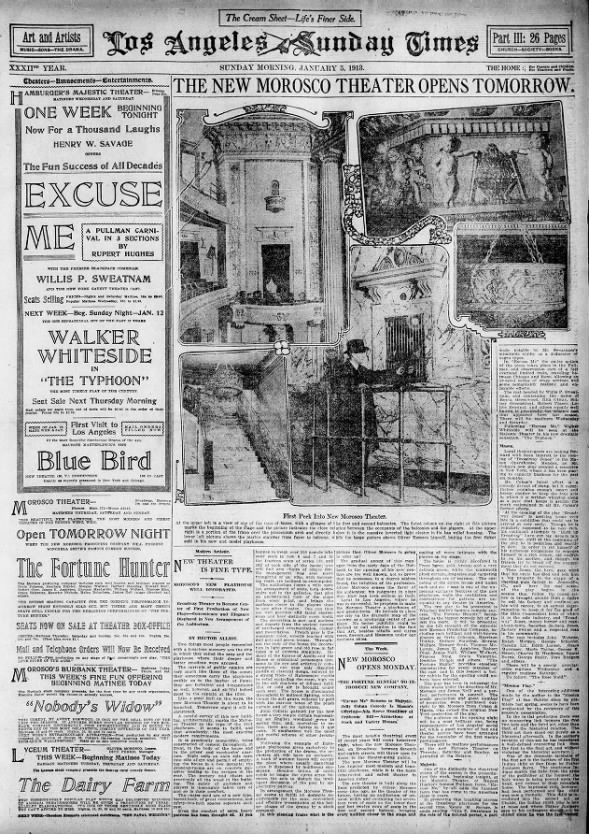 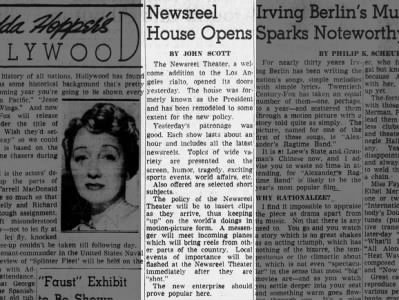 BROADWAY TREASURES (2019), a film about the historic theaters of Los Angeles, will be screening at the Globe on November 23, 2019 at 5 pm. Come see the film and watch a film inside the Globe.

Now in the photo section, a news clipping reporting the death of Oliver Morosco. He was born Oliver Mitchell in small town Logan, Utah and created the theatrical character known as Oliver Morosco.