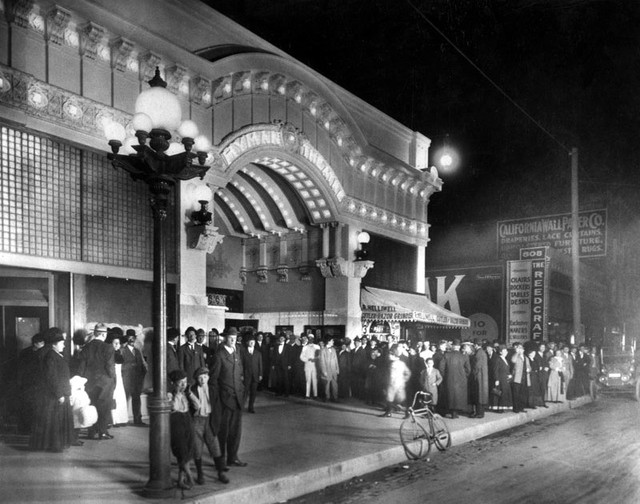 This theatre was located on what is now the site of the Tower Theatre on S. Broadway in downtown Los Angeles. The Hyman Theater was operated as part of the Arthur S. Hyman circuit, and opened prior to 1911. It was renamed Garrick Theatre by 1913 and was closed and demolished in 1927 to build the Tower Theatre.

Wrecking of the old Garrick Theater, located on the southeast corner of Eighth and Broadway and for many years a landmark of downtown Los Angeles, was started last week, to make way for a new $500,000 playhouse. Plans for the new theater, to be known as the Tower Theater, have been completed by architect S. Charles Lee.

The Garrick seems to have been run for at least part of its time by J. A. Quinn, also of Broadway’s Superba and later the Rialto theatres. The LA Times' Nov 15 1914 edition notes that the Garrick was about to celebrate the third anniversary of Quinn’s ownership.

Two more pictures of the Hyman Theatre alias the Garrick—at least, the theater manages to edge into the pix—can be found at

That’s an interesting site. He really gives you the flavor of LA a hundred years ago.

I’m new to this board researching the Hyman Theatre. I have an antique lady’s pocketwatch inscribed to a Ms. Yarnell from the Hyman Theatre. The watch was from around 1907 and the history I got was that it was circa 1910 awarded to a silent screen star. This came from the Los Angeles area so I am assuming it is from this long gone theatre. What a treasure trove of information that you’ve all compiled. Thank you!

The June, 1916, issue of a magazine called American Globe ran the following item:

“The New Garrick Theater on Broadway at Eighth street has been taken over by a Los Angeles Syndicate. A new picture machine has been installed and a nine piece orchestra, as well as organist, was added. M. Jean de Chauvenet, famous royal player and composer, is organist. Charlie Chaplin has moved again. He is now at home at the New Garrick Theater. The renovating of the house as well as a new ventilating system has added materially to the comfort of crowded houses. Recently there was a line more than half a block long waiting the enter the New Garrick, which is an indication of better times.”

Alterations were to be made to the Garrick Theatre in 1913, according to the March 15 issue of Southwest Contractor & Manufacturer. Lawrence A. Valk was the architect for the project, the extent of which was not specified.

Barman and Robinson were listed as the owners of the theater, and their address was given as 5th and Los Angeles Streets. It’s likely that they were also the owners of the Globe Theatre, which was at that intersection.

Dear folks, the first Wurlitzer model B theatre organ to be shipped (2 manuals, 4 ranks, curved console) went to this theatre, the “Garrick Theatre” in Los Angeles, on October 22, 1921. This is Wurlitzer Opus 475.

I can see from the comments that the theatre was demolished in 1927 to make way for the still-standing Tower Theatre.

The Wurlitzer shipping records tell us that the B was repossessed by Wurlitzer, and then shipped on February 18, 1927, to the “8th & Broadway Corp.” of Los Angeles, CA.

What does that mean?

I would imagine that either the entire organ was crated and shipped back to the Wurlitzer factory in North Tonawanda, NY for refurbishing, and then shipped out again to Los Angeles (possible), or simply that the organ was removed from the soon-to-be-demolished theatre (probably by the local Wurlitzer dealer… maybe Glockner Music Co?) and stored, and then re-installed right near where the old theatre used to be?

I do not know what became of this organ when the Wurlitzer was installed in 1921, perhaps it was taken in on trade by Wurlitzer and then re-sold somewhere else.

June, 1916: M. Jean de Chauvenet is the organist at the Garrick Theatre, and they also have a nine piece orchestra (possibly used in conjunction with the organ).

February 18, 1927: the Garrick Theatre’s style B is repossessed by Wurlitzer before this date, and is shipped on this date to the “8th and Broadway Corp” (whatever that means).

Week before March 6th, 1927: demolition of the Garrick Theatre building is started.

April 23rd, 1927: A new Wurlitzer model 216 (two-manual, ten-rank) theatre pipe organ, opus 1620, is shipped to the new “Tower Theatre” in Los Angeles, built on the Garrick Theatre site. Actually, I believe the Wurlitzer records show the 216 being shipped to the “Garrick” even thought it was in the process of demolition!

Perhaps the owners of the Garrick/Tower hadn’t yet decided upon the new theatre’s name at that point.

1931 [exact date uncertain to me]: the Tower Theatre’s model 216 Wurlitzer organ is sold to the nearby Los Angeles Theatre.

Many theatre organ people have heard tales of the “midnight organ supply” (the practice of organ enthusiasts, organbuilders, and organists stealing parts out of still-extant organs in theatres in the dead of night), but this story takes the cake!

What a vanishing act! The ENTIRE ORGAN disappeared!

(I mean the 216, not the B, although technically, the status of the B is “unknown” since it is not known where it went when then 8th and Broadway Co. got a hold of it).

Reportedly, the 216 still exists and is in somebody’s house somewhere (don’t know who, don’t know where). This rumor has also made its way around the theatre organ community, although no names have ever been mentioned, probably so that said organ-stealing party(/ies) can avoid the consequences.

The only mention I can find of the 8th & Broadway Corp. in the trade journals is this item from the California “Changes in Ownership” column of the July 22, 1932, issue of The Film Daily:

The Olympic was on 8th Street west of Broadway, and opened as Bard’s 8th Street Theatre in April, 1927. Lou Bard operated the house, but I don’t know if he owned it outright. It’s possible that the house was financed by someone else.

The lease on the Garrick (and the land under it) was taken over by H. L. Gumbiner in 1921, and he operated the house until having it replaced by the Tower in 1927. In the early 1930s the Gumbiners were operating the Cameo and Broadway Theatres as well as the Tower, but so far I haven’t been able to connect them with Lou Bard. There could have been a business relationship of some sort between them, and if so the Garrick’s organ might have gone to Bard’s 8th Street.

Gumbiner is best known for having built the Los Angeles Theatre in 1930, which is how the Tower’s organ ended up there. The Los Angeles was expensive to build, and Gumbiner’s finances were stretched thin, so moving the organ from the Tower was probably an economy move.