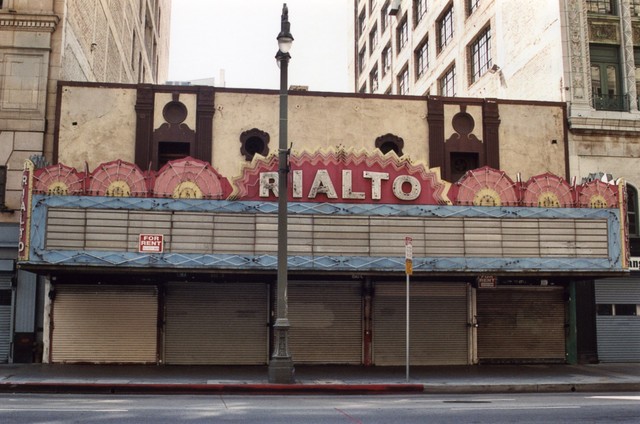 Built in 1917, Quinn’s Rialto Theatre was opened on May 21, 1917 by J.A. Quinn. Its first presentation was “The Garden of Allah” starring Helen Ware. Designed by architect A.R. Walker, the Neo-Classical style building had a central pediment on top of its facade. Inside the auditorium, all seating was provided on a single level. It was equipped with a Robert Morton theatre organ. The Rialto Theatre was purchased by Sid Grauman in 1919 and it quickly became part of his growing empire. It was remodeled by architect William Lee Woollett, and the Robert Morton organ was replaced by a Wurlitzer 2 manual, 7 ranks instrument which had been transferred from the Million Dollar Theatre, also operated by Sid Grauman.

Further modernization took place in 1923, and again in the 1930’s, when architect William Lee Woollett designed a new marquee with a spectacular neon display and an Art Deco style pay box. After Grauman, the Rialto Theatre was taken over by Paramount-Publix Theatres, followed by Fox West Coast Theatres and then Sol Lesser’s Principal Theaters Corp. of America in 1941. From 1945, Metropolitan Theatres chain took over.

The Rialto Theatre continued to show first run films for decades, eventually switching to Spanish-language films in the 1970’s to suit the changing neighborhood. In 1987, the auditorium interior was renovated to meet modern earthquake stress standards, and new seating, carpets and house curtains were fitted, but the Rialto Theatre was closed in October 1988.

Sadly, like many of the area’s theatres, its lobby became home to small retail shops. Its auditorium sat quietly waiting, perhaps in vain, to reopen. And its large marquee remained blank. In late-2013 the building opened as an Urban Outfitters store.

Who is in charge of this venue, and is there a lease on it?

I finally got around to uploading my photos of the interior.

SiliconSam: the building was being demoed when activists stopped them; that’s why it looks the way it does.

Penway: the Esther Williams on the marquee was left over from when they shot The Mambo Kings next door at the Tower.

Ken: that’s one marquee that I’d love to see repaired and lit up again!

Yes Michael Jackson’s Thriller video does show the Palace theater but it was the Rialto theater’s interior that was used for the movie scene at the begining and Palace was used for the exterior.

Some of the issues about the drop ceiling that posters have asked is that this theatre. Went through a earthquake retrofit that many older buildings had to do. The two theatres on Broadway that had to do the retrofit were Rialto and Cameo. On Hollywood Blvd. Mann’s Hollywood and Mann’s Fox Theatres were done. During Rialto’s retrofit they added the dropped ceiling and redid the seating and carpets. The theatre looked really nice after the job.

Rialto marquee is shown running at night in the Eddie Murphy movie 48 Hours.

It’s official. The Rialto has been converted into an Urban Outfitters. The interior is pretty cool. They were projecting old black and white films onto the former screen wall during their grand opening. Will drop by with my camera soon.

The original Quinn’s Rialto was architected by A.R. Walker in 1917 and utilized some of the aspects of the outgoing Hampshire Hotel which it replaced.