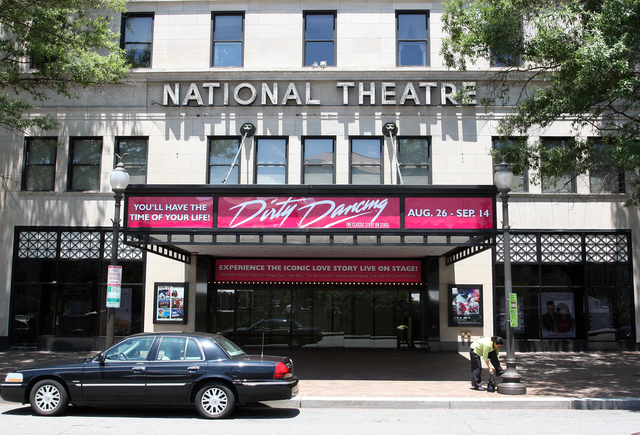 The first theatre on this site was opened December 27, 1835. It has burnt several times and has been remodeled several times. A 1922 remodel removed the supporting columns in the auditorium and the balcony was then supported by a giant steel girder. The world premiere of the musical “Showboat” was staged at the National Theatre in the 1920’s. It screened Cecil B. DeMille’s “King of Kings” for two weeks in December 1927. The premiere of Walt Disney’s “Fantasia” was held on May 12, 1941.

After many more years as a live theatre, it was remodelled in 1948 to the plans of architects John and Drew Eberson and converted into a movie theatre. A new projection booth was built above the second balcony and the mezzanine lounges were given a Chinese style makeover. Its first movie was Norma Shearer in “The Red Shoes” on October 15, 1948. Films continued to play until new management took over in 1952, and it returned to live theatre use.

In 1982, a two-year restoration of the interior was carried out to the plans of interior designer Oliver Smith. It re-opened with the musical “42nd Street” on January 23, 1984, and shows were booked by the Shubert Organization.

This was a long time ago. In the fall of 1964, I was stationed in Virginia while I was in the service. During that time, FIDDLER ON THE ROOF with Zero Mostel had a Pre NY Broadway run in Washington. I believe it either played the National or the Palace. Am I right or wrong?

Sometimes history is “re-written” and truth takes a holiday. The National did not convert from stage shows to cinema in 1948 because stage went out of style and movies were popular. The reason, as reported in the Evening Star, etc. was because of a court case which required the National to integrate (to admit blacks) because, unlike the movie houses, there was only ONE live theatre in town, thus “separate but equal” did not apply. Four years later, the new owners complied with integration, and Washington once again had live theatre. In that era, legitimate theatre was struggling even harder than movies to compete with the new 8 inch TV’s; and there were only a few plays/shows per year. In 1954 I took Diane here to see “South Pacific” direct from Broadway, at a crippling price of $4.40 for the best tickets, including the 20% Federal tax. First run movies on F Street were then 44 cents matinee 74 cents evening.

I have heard the stories of how the Broadway Actors boycotted the National moving legitimate theatre to The Shubert on 9th Street.. and how the National ran as a Movie house during the boycott.. But.. Fantasia opened in Washington on May 12th 1941 as a reserved seat roadshow at the National. (May 10, 1941 Washington Post)

update to include Washington Post advert for premier of ‘Fantasia’

“The Red Shoes” was a very popular British film about ballet dancers. I don’t recall that Norma Shearer was in the cast !