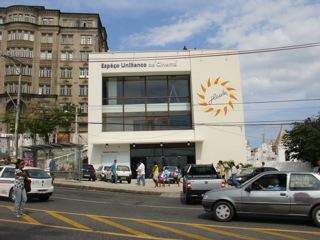 The oldest cinema in the city of Salvador, Bahia, was founded on 24/12/1919 with the name Kursaal Baiano. Later became known as Cine Guarani. With the death of filmmaker Glauber Rocha, in August 1981, it inherited his name, having worked until the year 1998 and was managed by the company Art Films.

After ten years closed, reopened its doors on 16th December 2008, this time under the name Space Unibanco Glauber Rocha, with four screens, restaurant, cafe and art shop, and rooftop terrace.

It is considered by many as the most beautiful cinema in Brazil.