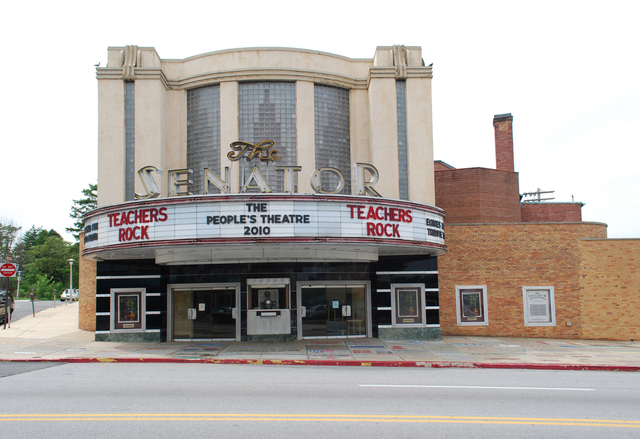 The Senator Theatre opened October 5, 1939, with 1,024 seats all on a single level. Its opening attraction was “Stanley and Livingstone” starring Spencer Tracy. It was designed in the Art Deco style by theatre architect John J. Zink, whose other theatre designs include the Uptown Theatre in Washington DC. Interior decorations were carried out by the Paramount Decorating Co. On one side of the projection booth was a sound-proof party room and on the other side there was a sound-proof nursery.

During its operation, the theatre has been used to raise millions of dollars for local and national charitable organizations. It has also hosted world premieres and has been featured in numerous films and commercials, including “Avalon”, “12 Monkeys”, “Cecil B. Demented”, and others.

As the Senator Theatre was running in the red, ownership fell in the hands of the City of Baltimore. The City closed the theatre in July 2010, the only time it had been closed since it opened. The City selected the operator of the Charles Theatre to take over, and it reopened on October 15, 2010 with the Bruce Willis thriller “Red”. With “The Hunger Games”, the Senator Theatre closed on April 26, 2012 for renovations that added to the original auditorium, three additional auditoriums adjoining the foyer.

Reopening occured with an October 10, 2013 benefit screening of “Hairspray” (1988) with John Waters appearing as he did at the original premiere of the movie at the Senator Theatre. The theatre reopened to the public with regular features on October 11, 2013.

The theatre is listed on the National Register of Historic Places.

I just read that, Tinsel. A possible August opening? If you read further back on the facebook page, they had hoped for a late May opening. I’m optimistic the place will at least look good if it is at least 2/3 as good as the AFI Silver. Now those little itty bitty screening room-sized auditoriums make me wonder how much sound bleed there is going to be either going in or out from the other rooms.

It reminds me of when DC’s MacArthur was triplexed. They made two smaller theaters out of the bowed out parts of the original and even had little balconies! What was decent about that remodel, too, was the dropping and rising curtains between the shows.

Looking at the pictures from the paper I hope they are not removing the marquee.

reopened on October 10 with a 35mm screening of ‘Hairspray’ with director John Waters in attendance.

Any new photos of the theater and inside? Did they keep the screen, curtains and marquee?

Seems like there was considerable drama going on a few years ago, regarding the theater’s future. I’m glad to see it survived to write another chapter.

New article out on Baltimore’s large format and roadshow history. The Senator and other Baltimore cinemas receive plenty of coverage in the piece. 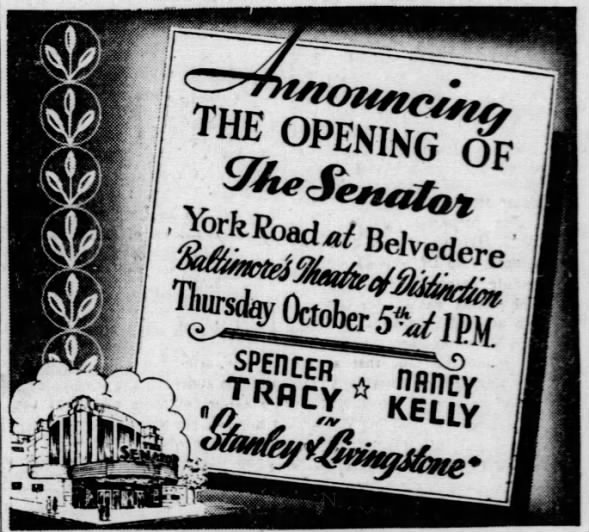