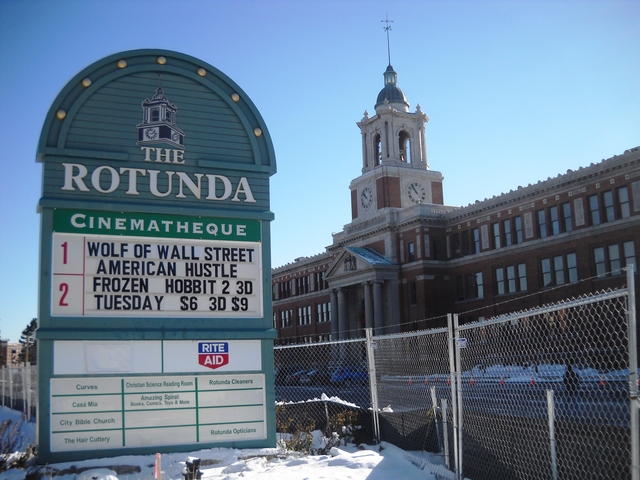 J-F Theatres opened the Rotunda Cinemas on September 13, 1974 as a twin theatre on the ground floor of the Rotunda Mall. It was later operated by Loew’s until they closed the theatre in March 2001. It was renovated by Tom Kiefaber who was then operating the Senator Theatre. He reopened it in December 2002 as a first-run movie house showing mainstream and art house films. He ran it as an independent alternative to multiplexes until closing the theatre on March 23, 2009.

The Rotunda Twin, originally opened in the 1970s by J-F Theatres, has always been a small twin house (it’s on the ground floor of a tiny mall). It would’ve been impossible to install Cinerama there.

BD, you most definitely did NOT see “Empire” at the Rotunda, and it was DEFINITELY a twin. I saw “Apocalypse Now” there in December 1979, and “Mary Poppins” in summer 1980.

You might be thinking of the Hillendale on Taylor Ave., where “Empire” played in imperfectly-framed 70MM.

AS for the Rotunda, during “Poppins” there was a loud buzz in the speaker every time an idle projector was started for a reel change! (Yes, there were still twin reel-to-reel machines there.)

The current operator of the Rotunda (whose name I can’t remember) was a booker for J-F Theatres in the 1970s. He plans to add a third screen.

This is a great neighborhood theater that was re-opened a couple years back by my good friend Ira Miller and his partners. The three theaters are small when compared to the giant mega-complexes seen today. Very reminiscent of how going to the movies used to be. Clean, friendly, comfortable with great prices. Plans are in the works to possibly expand further. Try this place and enjoy the show. I am sure you will like it and return again and again. The lady in the photo is Patty Duke. A big movie and TV star of the 50’s and 60’s. Remember her with Anne Bancroft in “The Miracle Worker” where she portrayed Helen Keller. That was some brilliant acting in that script

The Rotunda Cinemas will be adding a 4th screen and coffee shop to be open this summer.

The website for the Rotunda Cinemas is now http://www.therotundacinemas.com/

I stand corrected about the Rotunda opening as a single theater, and thanks for the proof… I was young at the time, so maybe the theater just seemed like it was bigger. But could The Empire Strikes Back have been shown there? I swear I saw it there.

The Rotunda Cinemas now has 4 screens, all with digital projection and sound. There is also a coffee shop named “Reel Coffee” as part of the complex.

Permanently closed July 8, 2015. A new theater by Cobb Circuit will take its place adjacent to the former Rotunda.