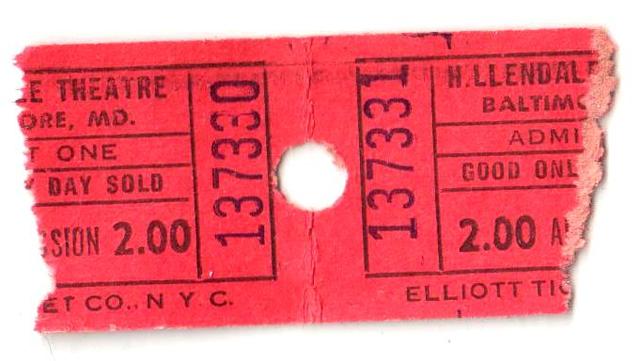 This theatre was built and owned by The Meyerhoff Family as was Edmondson Village Theatre. Although it was next to the Hillendale Shopping Center, it was not attached.

The Hillendale Theatre was opened on November 23, 1960 with “Can Can”. The building included a bowling alley in the basement.

Closed at the beginning of 1997, it reopened in June 2001 but closed in 2002. Taken over by new operators, it re-opened in 2003 as the Howard Rollins Cinema I & Grand Oscar Micheaux Cinema II as a showplace for Arfrican-American films, but this closed in September 2004.

I lived in the Washington, D.C. suburb of Bethesda, but in August of 1964 (probably Aug. 12-14), when I was 17, I came to Towson to see a friend. He set me up with a girl named Michelle, and together with his girl Sandy we all went to the Hillendale to see THE MOON-SPINNERS with Hayley Mills. The film had just opened locally in its first-run engagement.

Hillendale had the distinction of being the first Baltimore-area house to show a “Star Wars” film in 70mm (“Empire”). However, the presentation was imperfect: the ends of the picture were cut off, and if I recall, the surround speakers were placed in the CEILING.