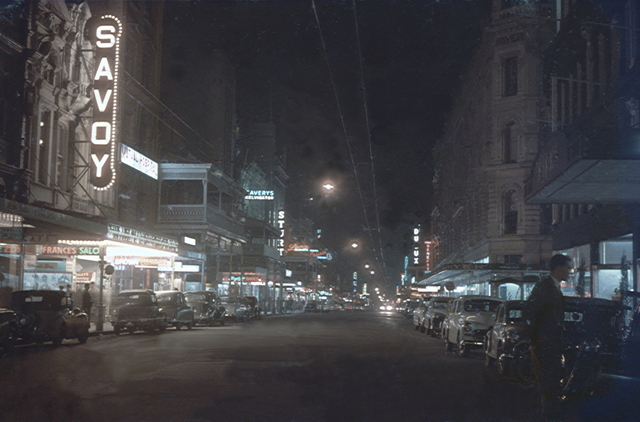 In the busy shopping heart of Adelaide was the Savoy News-Luxe Theatre, where you could drop in for an hour or so and catch up with the latest world and local news, plus a cartoon and a featurette.

The Savoy News-Luxe Theatre opened on September 26, 1941, and during the remaining World War II years was a popular place for catching up with the latest from the war front.

The lobby entrance was very small and the ticket box was set to the right. With a change of program every Friday, admission was just 1/- (10c).

Above the entrance was the projection room with a small window over looking the foyer. The seating capacity was for 310. The proscenium was tastefully rectangular with a set of French-action curtains.

CinemaScope was installed in the mid-1950’s, but the impending dawn of TV in 1959 signalled the death-knell of this popular little newsreel theatre.

It closed as the Savoy Theatre on Saturday February 25, 1961.

Under new ownership, the theatre was spruced up and reopened a week later as the Globe Theatre and again screened newsreels for the following eighteen months.

The final nail in the newsreel theatre’s coffin was firmly hammered in at the end of 1962.

Many seniors such as myself and my husband will recall that this theater was often used as an escape from the heat or cold, when shopping in Adelaide after the War wirh our parents. It was not ALWAYS the news, but a news and quick footup, for a short while in the days when we lived pre-airconditioning etc. NEWS AND A BREAK quite often at this lovely old cinema!!

Thanks sal, a lot of theatres here in the Southeast{USA}tended to sell Air Condition as much as the Movie playing.If you look at old ads from the 40’s to 50’s they let you know its “COOL INSIDE”.