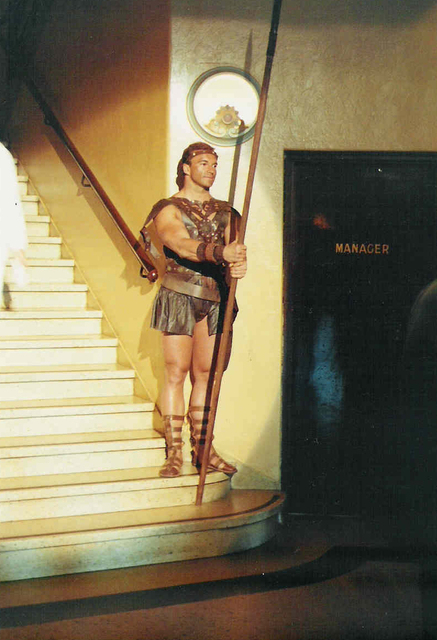 Built on the site of an earlier cinema known as the Diamond Theatre (1908) and latterly the Rex Theatre (1914-1925). That building stood empty and derelict for ten years, until it was demolished for the construction of the Astor Theatre.

The Astor Theatre, located in the Melbourne suburb of St. Kilda, opened on Friday April 13, 1936, with a seating capacity of 1,692. The opening films were “Hands Across the Table”, starring Carole Lombard and Fred MacMurray and “Wanderer of the Wasteland” starring Dean Jagger.

The Astor Theatre is truly a rare survivor of a type of suburban picture theatre that appeared in the 1930’s. In this period, the emphasis had shifted from the construction of mammoth picture palaces in the city to building more intimate theatres in the suburbs.

The Astor Theatre has seen very few alterations since 1936 and has survived to this day untouched by time. It functioned as a typical independent suburban cinema until 1967, mainly showing films on their second run, and later in 1967, making a radical change by becoming a Greek-language theater. It was also used for concerts, but closed in February 1982.

In September of that same year, the theater was re-opened by its present owner, George Florence. To show films to their best advantage, new projection equipment was installed in 1985, and in 1998, a new wall-to-wall superscreen (20 meters wide) was erected. The stalls seats 550 and the dress circle can accommodate 620.

Over the years the operators of the Astor Theatre sought to reinstate and restore long-ignored internal features, such as the theater’s original bold color scheme, indirect lighting, and much of the internal fittings and furniture.

The Astor Theatre, in true Australian tradition, usually runs “classic” double features, with a daily change of program. Blockbusters have longer runs. The Astor Theatre has managed to survive virtually intact and has succeeded in recreating the ambience of a traditional suburban picture theatre from the era of pre-television cinema. In 2015 it was taken over by Palace Cinemas chain and after some refurbishment, re-opened 25th June 2015.

The Astor Theatre was listed on the Historic Register on 26th November 1998.

Saturday matinees ceased long ago, and now, latest calendar has every Tuesday “closed for private function”. Double feature policy also seems to be waning. Many nights programmed for single feature only. Is this the beginning of the end?

Thank you to all the posters on this page. I am the proprietor of The Astor and am pleased to say that the new owners, St Michael’s Grammar School have embarked on an ambitious programme of upgrading and restoration. Nothing relating to the heritage nature of The Astor can or will be altered. It will remain a balconied theatre with 1100 seats. We were pleased with St Michael’s purchase of the Astor freehold, and together hope to launch the Astor into a new phase, that being re-instatement of the stage area for St Michael’s live productions, and other community performance and music related useage. It is my intention to also maintain film screenings as long as the public continue to support this aspect of the Astor. The screen can be engineered so that it is moveable to allow the stage to be used. The level of screenings will depend on the public’s support. As we also control a large library of 35mm and 70mm films (mainly classics from the late 1920s to the late 90’s) it is my intention also to see that the Astor survives well into the future as a ‘working cinema museum’ able to screen real film prints when most other cinemas have converted to digital. Digital is great, yes, but it cannot compare to watching real film – the stuff that ran through the cameras. As there has been no major disruption to the Astor’s continuous screening of film since it opened in 1936 is a good enough reason to expect that film screenings can continue to be part of its future. Thank you for your support. George

Wish the street car wasn’t in the way.

Well done George — your theatre is an absolute credit and when it comes to cinema treaures, it is world class.

wow, what great programming, I see that a week long run of ‘Raiders of Lost Ark’ of the new 2K Digital Cinema re-master is happening the first week of July!

FYI, closing apparently. Copy & paste link. Thanks to Tim O'Neill for the heads up.

Now taken over by the Palace Cinema chain. Was closed for a number of weeks following George Florenz’s expired lease. Closure was supposedly for renovations. While passing tonight I dropped in to see what upgrades had been made. Admittedly, only had access to foyer areas, but apart from removal of the totally inappropriate canopy over the circle candy bar, was hard pressed to see any improvement. Original box office now unused, along with 50’s ticket box (incidentally, attached to stalls concession stand) which now serves as ticket sales as well, along with bollards leading to this “convenience” that would put most garden mazes to shame. Peeling paint work, exposed cables, buckling wall displays. And don’t even get me started on the exterior. Admittedly those disgusting under awning led lights were installed before Palace Cinemas took over the lease, but HOW ON EARTH can they justify this bastardisation under their name branding? As for the famous neon Fin Light, until such time that restoration is actioned, please just TURN IT OFF. Hate to add to Palace Cinema’s profit, but keen to see if any renovations have taken place due to their claims of “restoring” this iconic building. Recent posts of elderly patrons in the stalls seems to indicate that seating has not been replaced, and most importantly, and sadly, previous lessee refused to acknowledge, installation of larger screen ruined sight-lines in the circle.

Seating CAN’T be replaced because it’s actually heritage listed but it can be repaired and they really do need to repair a lot of them. Also the theatre actually has all its screens, behind the current cinema-scope “super screen” is the older one from the 1950’s and behind that is the ORIGINAL 30’s screen. Also I’d like to see the original auditorium glass lights return as those looked a lot better than the current chandelier lights. Also my major gripe with the new management is how they refuse to use the upstairs snack bar, I’ve been to screenings here where the line for food has literally gone out the door and down the street. This could easily be fixed if they re-opened the upstairs foyer snack bar. Oh yeah and its also pay by card only which is kind of a pain.