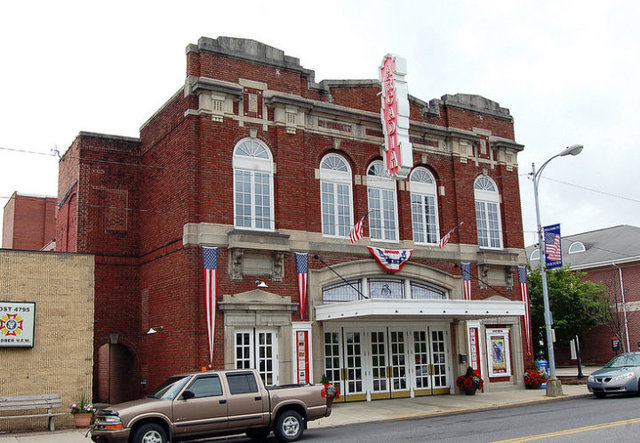 The Arcadia Theater was built in 1920, and opened as a vaudeville house. Soon afterwards, however, the theater was also showing silents, and eventually sound pictures.

By 1963, the original owners, the Berwind White Coal Company, put the Arcadia Theater up for sale, and it would eventually pass to three successive owners during the 1960’s and early-1970’s. Around 1970, the Arcadia Theater was renamed Cinema 56, but by 1975, the theater closed its doors.

In 1977, just as the Penn Wood Players were making plans to make the theater their new home, a disastrous flood heavily damaged the theater, and they abandoned it, and it remained vacant until 1990. At that time, the Eureka Coal Heritage Foundation acquired the Arcadia, with the intent of restoring it to it 1920’s appearance, and transforming it into a performing arts venue.

It wasn’t until five years later, however, that funds became available to begin the work, but since that time, the Arcadia Theater has been beautifully renovated and brought back to life, and today hosts concerts and stage shows on its stage.

Just wanted to add that the website has changed for the Arcadia theater i currently work at the restored theater and the new website is
WWW.ARCADIATHEATER.NET Thanks Dan

On April 21, 2011 this theatre will feature the disco group out of Canada, Boogie Wonderband. I have seen them in person and they are unbelievable! So if you love disco music of the 70’s, put on your dancing shoes and head to Windber PA.

Unfortunately, this show had to be canceled but you can still see this fantastic disco sound group perform on the floating stage in Bemus Point NY on September 4th with fireworks after the show. Bemus Point is on Chautauqua Lake in western New York State. Go to www.bemusbaypops.com for more details.