Update on The Ziegfeld: ‘The Master’ doesn’t help 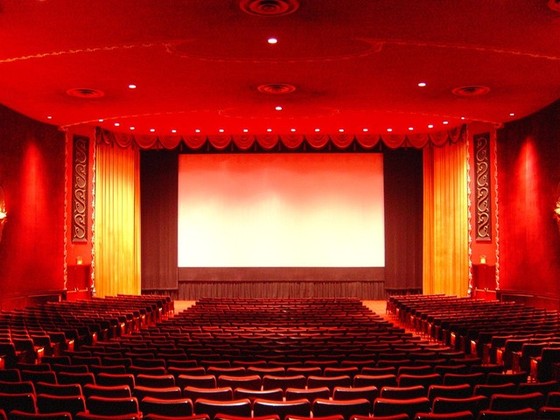 NEW YORK, NY — Despite a top-notch presentation of “The Master ”, the Ziegfeld is still not packing them in like they used to due to local competition. Cablevision is actively looking to sell the Clearview chain while the owners of the theatre watch the situation closely.

Read the full story in the New York Post.

(Thanks to Bill Huelbig for providing the photo.)

One of the problems is hte New York Times does not show The Master playing at the Ziegfeld in the ad. If the post and news is the same as that explains why the Ziegfeld is getting screwed. The Weinsteins are butt holes anyway especially Harvey.

Totally the wrong pic for a 1,000 seat theater that never plays art .

I am sure that additional advertising would help somewhat, but I have to agree with LIM; it is just not the kind of picture that will come anywhere close to filling up the Ziegfield. The reviews, which are generally favorable, are also mixed with regard to its qualities, and it appears that the fact that it was filmed in 70mm does not seem to have resulted in a whole lot of extra interest (especially since what is being presented is a standard ratio 1:1.85 film except with some really good photography). In a way, it a parallel example many of us have said recently about the current revival of 3-D; in order for a 3-D to be successful, there has to be a match between the scope and subject matter of the film and the imaginative and involving use of the process. This is no mass audience blockbuster (I doubt if it was intended to be); rather, it is a a film that will appeal to a more selective audience.

Lou Lumenick really loves the movies, and movie theaters, and is one of the best reporters and reviewers working in New York City today.

I still have no clue who’d want to buy Clearview Cinemas which is a mixed bag with several decent multiplexes and many more that were cheaply constructed, lack stadium seating – oh, and will have to be upgraded to digital – – like really soon. Interestingly when I was home last in NJ, two theaters I visited The Clairidge (Montclair) and Sunshine (NYC, run by Landmark Theaters) both showed first run films in 35MM. In Buffalo, NY – – a city otherwise a good 20-30 years behind the times culturally, our two main art houses (Amherst and Eastern Hills, run by Dipson) just went 100% digital.

Well Saps, this is a disgracefully researched article.

The Village East seating is not comparable to the Ziegfeld. It has only about 370 seats in the largest house.

The Ziegfeld was in the ads when it opened the film on week two, along with two screens at the nearby Empire on 42nd street, a theatre the NY Post article fails to mention altogether. The Ziegfeld was also closed on opening Sunday for the premier of another film, so he is comparing two days at the Ziegfeld to three at the Village East on two screens, Lincoln Square on two screens and Angelika on three. If anything, he is making an argument for multiplexing the Ziegfeld.

Lazy article from a notorious rag.

I saw the last 70mm, Branagh’s Hamlet in 1996, in NYC Paris Theatre. “The Master” here in Philadelphia is being showcased at arthouses (Ambler, Bala, Hiway, etc) albeit in 35mm. It is at multiplexes but likely at smaller screens. So, though it was wonderful to see “The Master” at the Ziegfeld, on the huge screen, I agree it wasn’t a movie that should’ve been expected to fill the Ziegfeld.

Al, I was about to post many of the same sentiments, but you not only beat me to it, you elucidated them more clearly than I ever could have.

To add to Al and Ed’s comments: I agree with the hatchet-job nature of the Post column; a little more research would have gone a long way (it’s not that hard to get the seating capacity for the screens at Lincoln Square…). That said, what I find disconcerting is that given the choice of theater playing The Master in NYC (70MM, 35MM, Digital), that the so-called discerning Manhattan filmgoer chose the subway rumble of the Angelika or the passe Cinema 1,2,3 on Third Avenue (to say nothing of the “other” (non-70MM) screens at Village East) over the Ziegfeld.

The Ziegfeld is in a difficult position: squeezed the Lincoln Square on the Upper East and the Empire (and to a lesser extent, Regal) on 42nd street.

I made the not-too-difficult extra effort to see “The Master” at the Ziegfeld, even though the Empire 42nd St. is much easier for me to get home to NJ from. I wish I liked the movie better – actually I didn’t like it at all – but I’m glad I saw it at the Ziegfeld. The center section was pretty well filled. Not too bad for a Tuesday night.

All excellent comments above!!!
John Fink: FYI-Clearview Central Plaza in Yonkers went digital a long time ago as did their nearby Bronxville location. Both theaters remain quite viable.

Off topic, but has anybody heard if any other exhibitors are looking to open in the southeast Bronx now that the Whitestone Cinema property was sold??? The entire borough remains underscreened and a major opportunity exists for a progressive exhibitor seeking market share when the Whitestone is replaced with an outlet mall.

Bill: How was the presentation. HowardBHaas made a comment on the Ziegfeld page that there was no sound for the surrond array. Was that your experience?

Hello- the and i mean “the problem” is that the Ziegfeld was built when they still held exclusive runs of new “big” films either or a reserved seat or continuous performance basis in one theater. i can remember many “big” films opening exclusive at the Ziegfeld with resulting lines around the blocks for weeks. but once the ear of the multiplex came about the Ziegfeld has been in a rather dicey situation. i have everything works out well in the end.

The presentation was fine, except for the lack of surround sound. They also didn’t use the curtains. They asked the audience to fill out a survey at ClearviewListens.com. In the comments section I asked them to use the curtains at every show. Hope they really do listen.

I liked seeing the round 70mm cue marks at the end of each reel – it’s been a really long time – but the movie didn’t really take full advantage of the 70mm format. Most of it seemed to be close-ups of Hoffman and Phoenix.

what’s the point of non-use of surrounds when the mixers could (but didn’t) use the traditional five-across stage channel configurement?

Saw a 70mm print of The Master at the Grand Lake in Oakland 1 week ago. Same thing, no surround or curtains being used. They were playing music before the film started and it was obvious they were using all speakers. I have never been to the Grand Lake when they didn’t use the curtains. Coincidence or director’s instructions?

PTA is a strange bird. I ran a test screening of his cut of Sydney (later to be known as Hard Eight) years ago, and he demanded my projectionist jerry-rig a volume knob for him so he (PTA) could control the sound levels in the theatre during the screening… even though that meant having to remove the smaller port glass window so the cable could run down to the theatre, causing the noise from the projector to drown out portions of the sound from the screen. And you can’t tell the director “Hey dude, that’s the job of the sound mixer during post-production, man!”

Awful experience at The Ziegfeld tonight – perhaps the reason its loosing money is Clearview is an awful operator. I want to like the chain – they and AMC own virtually every theater in NJ, but they make it so impossible with their awful attention to presentation. Tonight a blue anti-piracy light was shinning on the audience every two-minutes we were blinded for half a second, which management claimed to be a malfunctioning device that sat above stage right.

Can other folks involved in exhibition chime in – is this a normal thing, every 2 minutes? (Often Clearview has no idea what they are talking about, if a film is out of frame the staff will insult me by saying “the film was sent to us that way” or “we can’t change that, sorry”).

Uhhhhh – – I wish a really good exhibitor will take them over (National Amusements, Dipson, Kerasotes, Alamo Drafthouse —– please each take whichever site is suited to your business model away from this miserable chain!)