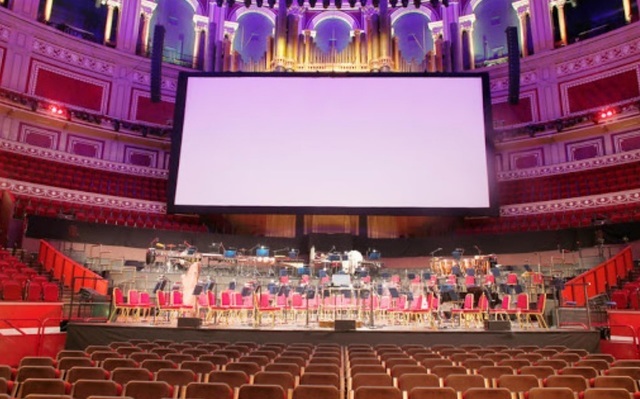 Designed to resemble a Roman Amphitheatre by civil engineers Captain Francis Fowke & Major-General Henry Young Darracott Scott. The Royal Albert Hall is one of the worlds' most famous concert halls. Construction began in 1867. The first concert was held on 25th February 1871 with an invited audience of workmen and their families, various officials and the invited public, which was a test for the acoustics in front of the 7,000 attending. The official opening was on 29th March 1871. It was opened by the Prince of Wales and attended by Queen Victoria. The Henry Willis organ is the second largest organ in the United Kingdom with 4 manuals, 111 stops (today increased to 147 stops) and 10,000 pipes. Over the years the Royal Albert Hall has held many events: debutant balls, car shows, Miss World, boxing, wrestling, tennis, rock, pop & jazz concerts as well as classical concerts, all to numerous to individually mention here.

The first film to be screened was the William Fox production of “Queen of Sheba” (now a ‘lost’ film) starring Betty Blythe, which ran from 21st-27th January 1922. In May & June 1955, the Royal Albert Hall was used as the location for the finale of the Alfred Hitchcock thriller “The Man Who Knew Too Much” starring James Stewart & Doris Day. On 4th December 1966 the European Charity Premiere of the remake of Walt Disney’s “101 Dalmatians” was held at the Royal Albert Hall. On 18th November 2002 the World Premiere of “Die Another Day” began a series of James Bond movie premieres. On 23rd October 2012 the World Premiere of “Skyfall” was screened here. The World Premiere of “Spectre” starring Daniel Craig was held on 24th June 2015 and attended by the Duke & Duchess of Cambridge. Films are now a regular part of the programming, and include screenings of classic films accompanied with a live orchestra.

The Royal Albert Hall is a Grade I Listed building.

I toured this venue with a Theatre Historical Society group in 1989, and also went to a couple of concerts there. Never to a movie. At one concert I was seated in somewhat of a circle around the main floor seats; the floor was wood. When the gigantic organ opened up, the vibrations from the bass came right up through the floor into the soles of my shoes. Amazing! And it’s a very impressive old building.

The Royal Albert Hall has the Last Night of the Proms there, and also Doctor Who at the Proms.

A new £2 million speaker system has been installed as of April 2019. Lots of details via this link: https://www.wired.co.uk/article/royal-albert-hall-acoustics-renovation

Joeswin: Thanks for the link, interesting reading!

A friend of mine attended a Tony Bennett concert (I’ve known him since we were teenagers, and he’s always been a fan of “crooners” of “standards!”) this evening—I wouldn’t place much weight on any feedback he has to offer on the sound system, but he did send a couple of (mobile captured) video clips, and it does sound like the “echo” issues at the Albert Hall are tamed.

He has also sent me a couple of photos, including of the “flown” speaker arrays; they will be uploaded in a moment…

Regarding your comment on the OLS page on premieres, I suspect the OLS will continue to be the venue of choice. Leicester Square is a second-to-none setting; and the OLS, with its “glass box”/enclosed balcony, permanent LED display module screens on its façade, new “VIP red rooms” (accessed via the two front splay wall fire exits), very high quality foyers, luxury seating, and, of course, the new top-end Dolby Cinema installation, is “made” to host movie premieres.

Also, I’m not sure the “house” sound system at the Royal Albert Hall would be suitable for film presentations.