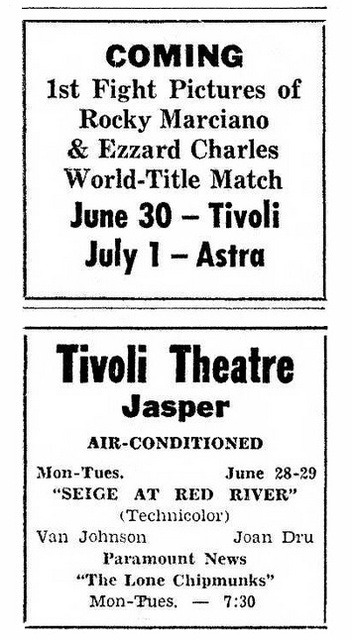 The Tivoli Theatre was opened on August 16, 1924 with Gloria Swanson in “The Humming Bird” on the screen and vaudeville on stage. It seated 470. The Tivoli Theatre was closed on July 19, 1970 with Jacqueline Bisset in “The Grasshopper”. The cause of closure was a fire which killed the owners daughter. It was converted into retail use as a furniture store. It is now a gift shop.

The Tivoli Theatre launched by Joseph W. Gutzweiler on August 16, 1924 with Gloria Swanson in “The Humming Bird” and live vaudeville. The venue was built on the site of Kunkel Hall which was built in 1884 and razed in favor of the theatre in 1923. Architect M.F. Durlauf designed a steel-structured building whose front was comprised of white buff brick and Bowling Green limestone trim which apparently made a nice upgrade to Kunkel’s. Gutzweiler would go on to create the long-running Astra Theatre, as well.

The facility also housed the popular Tivoli Soda Fountain and Drug Store. That store became Poe’s Drug Store followed by Beckmann’s during the theater’s run. The Tivoli ran until July 19, 1970 when it closed with “The Grasshopper.” Almost immediately thereafter, Kersteiens Construction removed the sloping floor and seats to transform the building for other retail purposes. It would become Schneider’s Furniture and Carpeting store which expanded into the former theater’s spot.

More confusion caused by bogus addresses. This contributor routinely gives bad addresses, which combined with a stupid modern paint job, made finding this theater hard. The correct address is 615-621 Main, in the Joseph Gutzweiler building.

Kunkel’s Hall was a wooden building of two stories, including a house. For some reason, even though there are (or were) several large factories in town, Jasper’s downtown even on the 1909 map is mostly crude wooden buildings and lots of empty lots. Schneider’s was originally at 505 Main, so they didn’t expand into it so much as move. This also explains ads from the 70s saying they were ‘on the square’.

The building has been painted an ugly brown, and has characterless new windows. The front, where the soda fountain presumably was, is a cafe, and the auditorium space is a gift shop.

The Tivoli Theatre was one of nine Indiana houses at which National Theatre Supply had recently installed a Walker Silver Sheet screen, according to The Film Daily of January 18, 1936. The Dubois County Herald of February 26, 2014 said that the Tivoli’s closure in 1970 was due to a fire that killed Joseph Gutzweiler’s daughter, Margaret Ann. The Gutzweiler family continued to operate Jasper’s other movie house, the Astra Theatre.