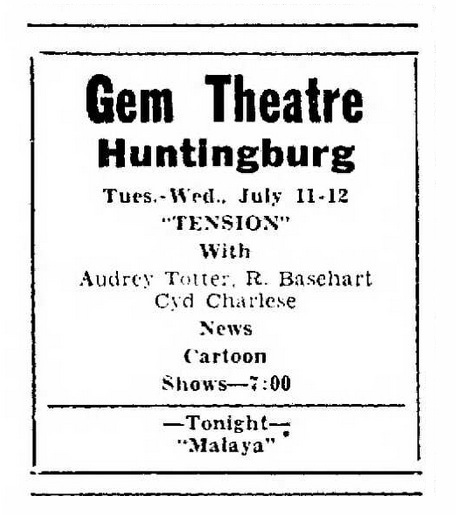 Here is photo of the Gem Theatre. The building now houses a retail store.

The Gem Theatre launched February 8, 1913 in downtown Jasper, Indiana promising 10 minutes of film for a nickel. Chris Winkenhoefer ran the theatre 40 years until his death in 1953. The theatre soldiered on continuously until April 24, 1956 with a showing of “Good Morning Miss Dove.” It was used for a few sporadic events until the building was repurposed for Ruttkar’s 5 and dime variety store.

dallasmovietheaters' comment is for the wrong city. He’s talking about a Gem in Jasper, which is up the road. All of that information needs to be removed, and his comment should either be reposted under the Jasper theater or removed to avoid confusion. This building didn’t even exist in 1913.

For some reason, the top of the building has been modified to make it look older than it is, with a fake or salvaged tin cornice stuck on.

We don’t have a page for the Gem Theatre at Jasper, Indiana. I suspect that there wasn’t one, and dallasmovietheaters just mentioned the wrong town. I’ve found a reference to a Christian Winkenhofer being the operator of the Gem in Huntingburg, and the Gem in Huntingburg is the only theater of that name I’ve found mentioned in the archives of the Jasper Herald, which otherwise mentions only the Tivoli, the Astra, and earlier a house called the Star Theatre, operating in the 1910s.

However, the Huntingburg Independent does mention the Gem Theatre in its issue of July 29, 1916, so dallasmovietheaters' opening year of 1913 could be correct. As the building at 414 E. Fourth Street was built in 1920 (confirmed by the NRHP registration form for the Huntingburg Commercial Historic District) it must be that the original Gem was either rebuilt, or moved to new quarters at this location.

If the theater opened in 1913, it had to have moved. There are three theaters on the 1913 map. One is an airdome, and one has a note that it will shortly be vacating the premises.

I suppose the airdome could have been the original Gem, but it doesn’t seem likely. The theater that was moving doesn’t make too much sense, since the new building wouldn’t have been ready for about 7 years. The last theater was identified for me as the Empire, presumably by Ken, who has resources I don’t, and can often come up with names.

Anyhow, if a Gem opened in 1913, it can’t have been this one, so we still should change the listing to reflect that.

The Gem might have moved more than once before settling in to the 1920 building. In the days of benches and folding chairs on flat floors a theater business could probably be moved in an afternoon. There is another problem with the Gem, though, as it is not one of the two theaters listed at Huntingburg in the 1914-1915 American Motion Picture Directory (they were the Empire on 4th Street and the Princess, no address given. The only theater listed for Jasper was called the Nickelo, located on the square.)