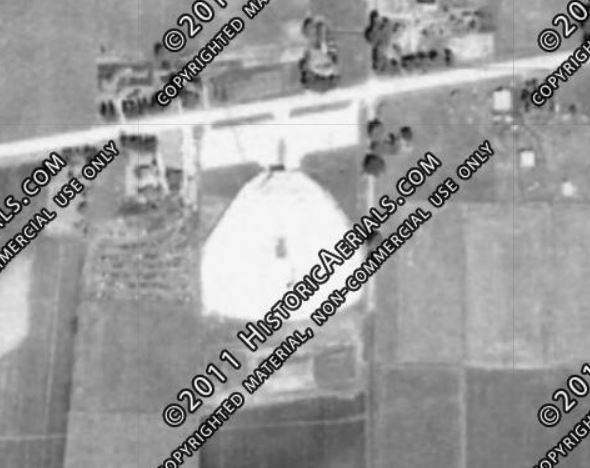 The Burlington Drive-In opened on June 10, 1949, featuring the 1947 drama “Black Gold” with Anthony Quinn and Kathryn DeMille, with two color shorts. The drive-in featured a parking ramp that could hold 420 cars with RCA in-a-car speakers for each parking spot. It also featured a 50 ft. X 40 ft. screen tower with a miniature three car replica of a diesel train set up in front of it for the kids to ride.

Eventually the screen tower was widened to 84 ft. for screening CinemaScope films. The drive-in was opened by Central States Theatres Corp. which was located in Des Moines, Iowa. Myron N. Blank was the President. At the peak of the 1950’s, Blank operated 52 hardtop and 31 drive-in theatres in Nebraska and Iowa. With urban sprawl increasing in to the 1980’s and 1990’s, the 14 acre drive-in theatre property was becoming valuable. The demise of the Burlington Drive-In occurred when Central States opened a six screen movie theatre at the Westland Mall.

The Burlington Drive-In closed in September, 1994, with a triple-feature of “The Lion King”, “Angels in the Outfield” and “I Love Trouble”. The property was sold and the drive-in theatre was demolished in December of 1994 to make way for retail. Central States Theatres was sold to Cinema Entertainment Corp (CEC) in 2002.

The Address 406 E Agency Rd. is Located in West Burlington, IA 52655 not Burlington.