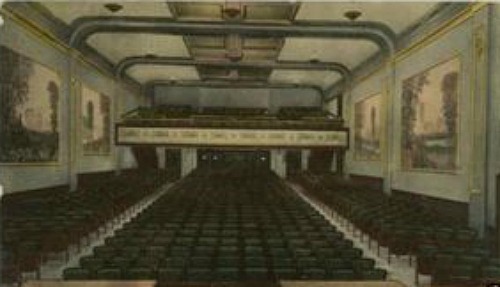 Opened on December 8, 1913 as the Starland Theatre. By February 1916, it had been renamed Nemec Theatre, and was screening D.W. Griffith’s “Birth of a Nation”. Later renamed United Capitol Theatre and then People’s Theatre. By 1926 it had been renamed Grand Theatre and was operated by the Finkelstein & Ruben chain. They were taken over by Publix and eventually merged with Paramount Pictures Inc. and was operated through their subsidiary John Friedl. On July 3, 1945 it was renamed Hays Theatre, with seating given at 820. The theatre was operating under the Minnesota Amusement banner and during the 1960’s by ABC. Finally operated by Plitt Theatres until its closing. It was demolished in 1977.

A new library was built on the site where the theatre once stood.

The book St. Cloud, by Harold Zosel, part of the Arcadia Publishing Company’s postcard book series, has a photo of the auditorium of the Hays Theatre. The caption says that the house was opened by Frank E. Nemec in 1913 as the Starland Theatre, and later operated under the names Nemec Theatre, United Capitol Theatre, People’s Theatre, and Grand Theatre before becoming the Hays Theatre. It says that the building was demolished in 1977.

The August 16, 1913, issue of The Construction News said that construction was to start soon on a vaudeville house, 44x132 feet, to be built at St. Cloud for F.E. Nemec. The September 6 issue of the same publication said that excavation had begun for F.E. Nemec’s Starland Theatre at St. Cloud. The project was to cost $28,500, and the general contractor was Edward Hirt.

The house was mentioned as the Nemec Theatre in the September 16, 1916, issue of The Moving Picture World.