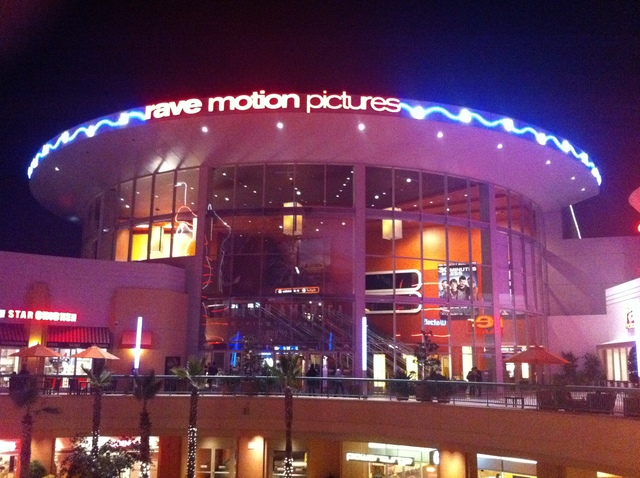 Opened by National Amusements on July 13, 2001, the Bridge Cinema de lux is a top notch cinema.

Whose initiative was it to drop IMAX from this theater: Cinemark’s or the IMAX company?

I was at the Rave last week and there were temporary construction barriers blocking off the old IMAX entrance. So they were doing some sort of work on that auditorium.

Also, has Cinemark officially dropped “Rave” as the name? I understand that large outdoor signage may take a while to change, but the website still says Rave 18 (the “IMAX” has been removed from the name, though).

The Cinemark website now has this theatre as “Cinemark 18 & XD”

I am sitting inside the XD auditorium as I type this. In a nutshell, it’s the same IMAX screen with updated decor. Better seats, snazzier side paneling, in line with Cinemark’s color scheme. They’re running Barco’s Aura 11.1 sound. I’ll report on how it sounds when the movie’s done. So far, pretty good.

Wow…that is ONE GNARLY SOUND SYSTEM! Very impressed with this XD room! Surely all the XD’s aren’t this good!

This theater’s IMAX has been converted to Cinemark XD, yet Chris reports the screen remains the same size, so does that mean films like Guardians of the Galaxy (and previously The Dark Knight) which expand at times to fill the full aspect ratio of the IMAX screen will still have that feature in the new XD theater? If not, I guess the AMC Universal Citywalk Stadium 19 with IMAX will be my new destination for such films.

Anyone can confirm if this was supposed to be an Edwards Cinemas but was sold/bought by National Amusements before construction was finished. It was still being built when Edwards declared bankruptcy.

That’s exactly what happened. Theatre was under construction when Edwards bit the dust. The Howard Hughes Promenade opened up with this big massive shell of an empty theatre in the early part of Summer 2001. A short time later, NA bought it and named it The Bridge Cinema deLux and the crowds came in DROVES!

This opened on July 13th, 2001. I posted a couple of grand opening ads in the photo section.

Disney built its Disney’s Fantasia 2000 IMAX theatre on this site.