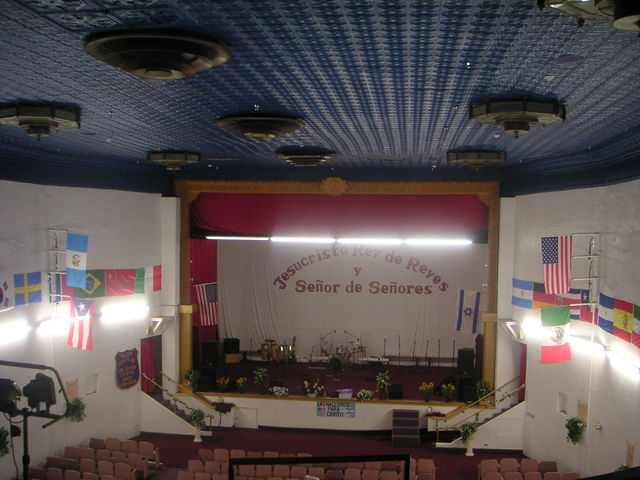 Built in 1912, this opened on June 16, 1913 as the Auditorium Theatre. The operator soon went bankrupt and it closed, only to reopened as Clune’s Santa Ana Theatre on October 27, 1913. On November 11, 1919 it was taken over by Ed Yost and was renamed Yost Theatre. After serving many years as a movie theatre, the Yost Theatre closed in 1985, and became a church.

In 2007, restoration and conversion to a live theatre was carried out by architect Thomas Berkes, and it re-opened as a concert and live performance venue.

My heartiest congratulations to all who were part of this project.

Here is a photo that was posted on Google:
http://tinyurl.com/yhka8uh

While semi open for a few years now, the Yost is celebrating it’s official reopening this weekend, after a $2.7 mil remodel/upgrade. The venue is now focused on live concerts and use as a club, with a full bar and restaurant in place.

As a former US Navy Color Guard member, it is always nice to see the American flag on show (see the opening photo) but your theater display needs to be rearranged in the correct manner, as prescribed by the US Government.

1, The US flag should always be positioned on the far left of a stage (especially when other flags are displayed) with the field of “stars” positioned in the upper left portion of the flag. #2, This is then followed by State, County, City and organization in that order to the right. #3, No other flag, including those of foreign countries are to be positioned any higher or ahead of the US flag.

This common problem is so often created by people who mean well but have never been properly informed. FYI, any American veterans facility or flag shop will gladly supply you with an official printout with pictures.

The Yost is the subject of a segment of tonight’s Ghost Adventures on the Travel Channel. Major haunting.

I’ve discovered that, following an error in an early trade journal, I switched the first and second names of the original architect of the Yost Theatre. It should be Frederick Harry Eley.

A native of Colchester, England, Eley immigrated to the United States around 1902 and became the first registered architect to practice in Santa Ana. In the late 1930s he removed his practice to Salem,Oregon, where his son, Frederick Richard Eley joined him as draftsman. The younger Eley later became a partner in the Seattle firm of Carlson, Eley & Gravsted, who designed John Hamrick’s last Music Box Theatre in Portland in 1959.

The opening movie shown at the Yost Theatre on November 11, 1919 was “Checkers” starring Thomas Carrigan.