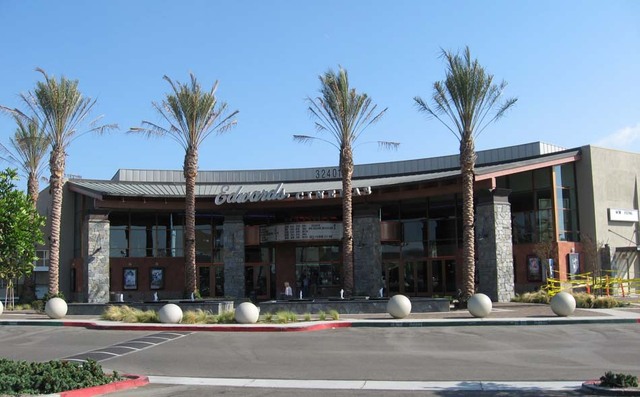 Originally opened as Edwards Ocean Ranch 7 on October 14, 1993. It was designed by BB Architects. Later taken over by Regal it was closed August 4, 2011. It was renovated/refurbished as the Cinepolis Ocean Ranch 7, operated by Cinepolis Luxury Cinemas, opened on June 1, 2012 with 684 seats in seven auditoriums. The interior of the old Edwards Theatres was completely gutted so guest experienced a whole new theatre.

Although the exterior still retains its distinctive curvature and a canopy supported by flagstone-face pillars, it now has a smoother flow. The old box office has been removed and tickets are now purchased inside. Also missing is the old Edwards marquee so there is now an almost continuous expanse of glass across the entire entrance. The forecourt of the theatrehas two large patios at each end of the entrance and bubbling water fountains at the front.

The dining menu, which includes wine, spirits & beer is available at the push of a button in the auditoriums. Patrons can also dine in the lounge or on the patio to enjoy the California ocean breezes.

The Mexican chain was founded in 1971 in Morelia, Michoacan. In 2010 their cinemas, also located in India and Central and South America, had attendance of 116.9 million.

The designer of the theatre is SMS Architects of Irvine, CA. who are responsible for Cinepolis theatres in California towns of Del Mar, La Costa and Rancho Santa Margarita.

This theater will be closing on Aug 14th. It will be renovated into a luxury cinema ran by Cinepolis who recently opened their first US theater in Del Mar.