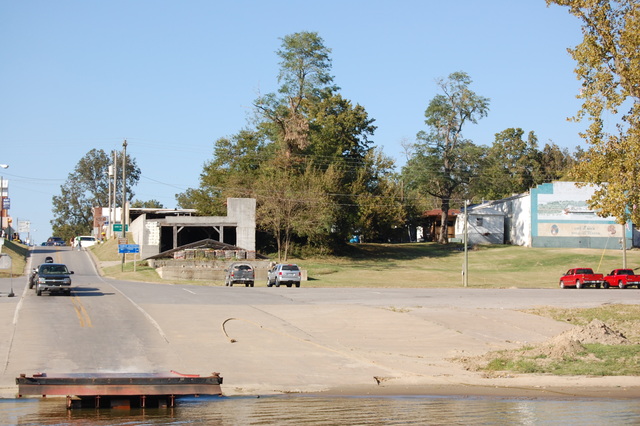 In the 1980’s it began use a a live performance theatre and by 2011 it had been renamed Riverfront Opry House, presenting live theatre.

Here’s an article from the Harrisburg Register dated April 22, 2011.

Cave-In-Rock’s Riverfront Opry House has come back to life.

The one-time movie theater in operation during the 1950s has hosted a smattering of events since it last showed movies, but the Riverfront Opry House Restoration Committee is hoping to bring community theater to area residents once a month.

The committee’s president Shirley Lewis and her husband, Lonnie, owners of the Cave-In-Rock Ferry, bought the building from Cave-In-Rock and gave it to the non-profit group as a tourist draw.

While some on the committee want to hold shows more frequently than once a month, that goal is too ambitious for the fledgling group.

“Some want to have one every weekend, but we need some more people involved,” Lewis said.

The theater seats 200 people and retains the old movie theater’s sound system which the committee is working toward restoring. In the meantime they are relying on a donated PA system.

The theater also still has the old movie projector which works, but wiring work and the know-how to work it is needed to make it operational. The committee isn’t thrilled about the idea of using the opry house for showing movies, anyway, when the live action dramas are drawing 75 to 80 people.

The Riverfront Opry House held a Christmas show involving the comedic “Return of the Bean Family,” a talent show and a variety show.

On April 23 the committee is hosting an Easter Parade at 5 p.m. followed at 7 p.m. by an Easter Drama written by Brenna Morris of Eldorado. The parade floats will be decorated in scenes leading up to and including the Crucifixion and Resurrection.

On May 7 the committee will have crafts set up on the street to coincide with a car show organized by Potters Church with golf carts ferrying people from one event to the other. After the craft and car show is a 7 p.m. “Bean Family” comedy show.

At 7 p.m. June 4 the committee plans a “Redneck Style Show” with Tommie Hogfinder showing off his spring line of redneck apparel.

“I still say we need a musical,” Douglas said.

Though the building has needs that will be fixed as the committee raises money or finds volunteers, the stage is ready to receive the performers.

There is a dressing room in the basement and a sound booth behind the stage ready for any group with a performance that needs a venue.

“Anybody can use it. They’ll pay a fee if it’s their own show,” Lewis said.

The committee will also be selling popcorn, soft drinks and candy to raise money, they accept donations and expect to hold raffles, sell Christmas decorations and “whatever we can do to raise money,” Lewis said.

The committee is keeping ticket prices reasonable with kids five and under admitted free.

“We want to give people something to do,” Douglas said.

Boxoffice, April 2, 1949: “Cave-In-Rock, Ill. - The Ohio Theatre, which was badly damaged by fire January 23, has been reopened by Carl Humm and Tom Partain. A plastic fireproof screen has been installed and the projection room has been made as nearly fireproof as possible. Steel guards, which will drop automatically, have been placed over all opening so that it would be sealed off in the event of a fire. A fireproof door, which is closed automatically, shots off the booth from the rest of the house. Humm and Partain did not carry insurance on either the theatre building or its contents prior to the fire.”