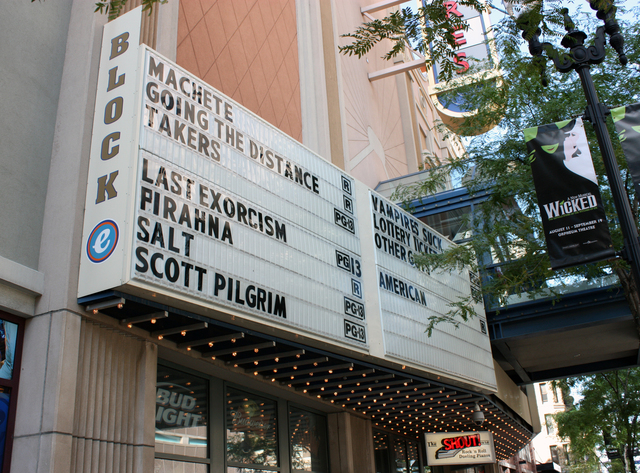 The Crown 15 opened on November 1, 2002 on the top floor of Minneapolis new Block e entertainment building. It is block E on city maps. During the long years of trying to get a block rebuilt, it just became known as Block E and the name stuck.

Like all downtown cinemas, the Crown Block E Stadium 15 suffered from a parking problem. It was taken over by Kerasotes Theatre in September 2007 and by AMC Theatres in May 2010. It was closed on September 23, 2012. It was modified beyond recognition as a former theatre to become a basketball practice space and a medical facility.

Hard to imagine big cities like Minneapolis without downtown theatres. I guess I’m just spoiled with all the ones here in Toronto and other big cities.

How true, Tim; well, at least here in the States we have a few cities such as Seattle and Chicago (though mostly on the north side of the river) and a few others that have some truly downtown movie theaters, but it sure is not as it once was. And, even though I love Toronto, I cannot help but remember what Yonge and Bloor Streets used to be in terms of theaters that one could choose.

Ahh, I remember that well as well. I’m hoping with all the condo construction happening around Yonge and Bloor now, someone will open something new in that area again. I know that the Varsity is the only one with 12 screens but I would think that Empire could open something in that area. If only the 10 screen complex at 1 Bloor E could have been built before Cineplex bought Famous Players, then there would be 2 midtown complexes now. But if you count the Varsity’s 12 screens, that’s almost as many screens that used to be in the area prior to Sep 1986

Officially closed. So it looks like the strategy Crown Theatres once had for building these sites failed – – http://www.specialtyretail.net/issues/nov98/CROWN.adding%20gems%20to%20the%20crown.htm (consider the level of underperformers they’ve had including three failed multiplexes – Neonopolis, Block E and Abacore) – – I believe this one closed because they had a deal that essentially allowed them to not pay rent as long as they made under a certain number, no wonder AMC wanted to stick around.

I don’t know if the lease arrangement Crown had at Block E was really typical of their business strategy (though I rather doubt it), but the link to the article I posted on March 18, 2011 describes that particular deal; basically the rent was based on a sliding scale that varied depending on gross receipts. When AMC took over, they wanted a lease extension under the same terms, but the landlord refused. AMC went to court, but lost.

The theater might have well have closed anyway, as the the whole Block E venture as originally conceived has not been successful as a shopping/dining/entertainment destination, and I have heard that a conversion proposal to a casino (we sure don’t have enough of those now, do we?) has been floated.

The Crown Block E 15 Stadium 15 was designed by Port Washington, New York, architect James Thomas Martino. I’ve been unable to discover who designed Block E itself. Perhaps they are hiding in shame.

This opened officially on November 1st, 2002 with previews on October 25th. Grand opening ads in the photo section and below.

This building is still standing. It was extensively remodeled and the upper floors converted into practice space for the Minnesota Timberwolves and Lynx basketball teams, as well as a sports medicine facility for the Mayo Clinic. It was reopened in 2015 as Mayo Clinic Square. The redesign, including an entirely new façade, was so radical that it might easily be mistaken for entirely new construction, but it is the original building’s bones underneath.

Now I get it. Thanks for the info Joe!