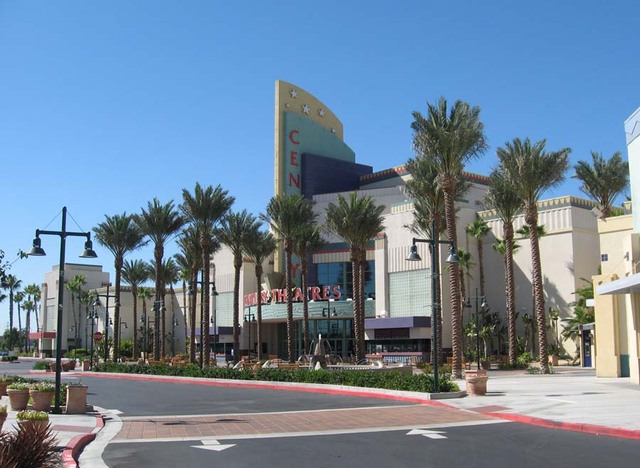 This is a megaplex located in a shopping center right near Arrowhead Pond (now the Honda Center) in the heart of the Orange County. The Century Stadium Promenade 25 was opened by Century Theatres on November 21. 1997.

It has a beautiful, retro-style marquee, with all different colors of neon. It’s quite attractive at night, and reminiscent of old time theaters.

The auditoriums have comfortable stadium seating with rows alternating between love seats and rocking seats, with a total seating capacity of 5,000.

A great place to see a movie.

In 20920 it was renamed Century Stadium 25 XD and the seating capacity was reduced to 2,161 with the installation of recliner seats.

Thanks for the link to the drive in. Some theaters on the site have the drive in version of a multiplex/theater that replaced it as the same page, and this one apparently has two listings.

I used to come here quite frequently when I lived in Orange County. It’s a nice theatre with all digital sound and all the auditoriums were THX certified (don’t know if they still are now that Cinemark bought Century – word has it that they dropped the THX certification). Some auditoriums were hit and miss sound wise (one aud had its digital sound equipment fried and never replaced) and the screens are all top masking. But, as far as multiplexes go, I preferred this place to the (OVERRATED!) AMC 30 at The Block.

I came here today to see Toy Story #D in the new XD. $15 for a mat, and still had to sit through a preshow, and commercials. The screen was about 60 feet or so, but there was no masking at all, and it was sized for a flat film. The previews in scope were in the middle of the screen.

The sound was impressive, but the picture was amazing. The clarity and brightness was the best I have seen for a 3D show, more so then the 15/70 IMAX in Cathedral City. However, the RealD 3d didnt really amaze me. No images really popped, and the effects were quite muted. Not nearly as dramatic as aIMAX 3d.

The seats were nice, but no new configuration and the leg room was lacking. Its worth a trip, but not sure ill go back.

This theatre’s construction was a pain in the butt for me. At the time, I was a manager at the AMC Fullerton 10 (the expansion to 20 hadn’t taken place yet) and AMC’s western division office wanted someone to keep tabs on Century’s latest venture in the market (they voiced a concern that it might be a threat to their business). So, every week I would have to go out to the construction site to compile an update. They wanted pictures, hand drawn maps/diagrams, and a detailed summary of what I saw. The big problem was that this was conducted during the project’s earliest stages; i.e. I was basically providing surveillance of a dirt lot. The end result being reports like “ten foot pile of soil now located on western corner of property (see photo 3)”. When the theatre structure actually started to go up, they stopped having me go out to the site. I never quite understood why they lost interest in monitoring the competition at this more relevant juncture.

Despite early concerns, the Stadium Promenade never had much of an impact on AMC’s area theatres. Fullerton served an entirely different market, the Block would later carve out it’s own highly successful niche, and Mainplace folded more as the result of the Block opening.

Theatre’s ownership needs to be updated. Cinemark is the proper owner…but the theatre is still branded as a Century (Century is one of the 4 sub-brands under the Cinemark umbrella).