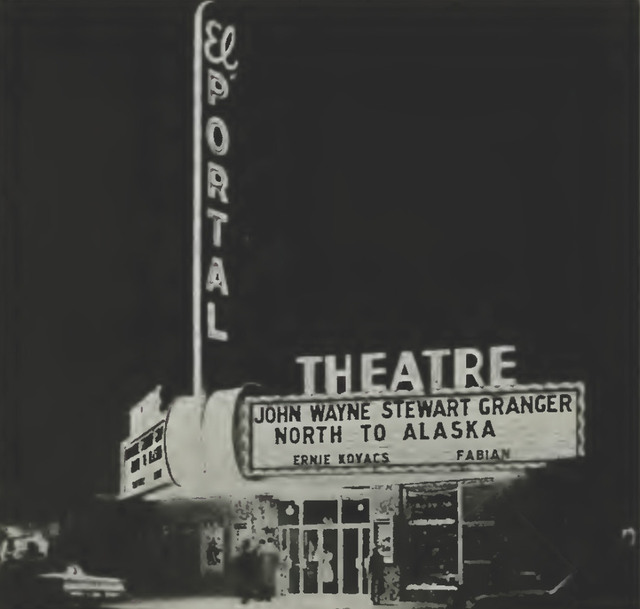 The El Portal Theatre was built on the site of the old Las Vegas Airdome. It opened on June 21, 1928 with a pre-release screening of Clara Bow’s movie “Ladies of the Mob”.

It was the first building in Las Vegas to install air-conditioning. It was remodeled in 1961 to the plans of architect J. Maher Weller.

Closed in the late-1970’s, it became El Portal Gifts and then served as an Indian Arts & Crafts store. They moved to the next-door building in 2018. Some of the decorative interior remains intact, mainly the ceiling beams.

heres a video clip taken 1957 of el portal at frank sinatras movie premiere of ‘the jokers wild’ you can make out some of the front entrance https://www.youtube.com/watch?v=aAQa58bVaSs hope this works

On August 20th during what I called my “Vegas Strip Side Trip 2017” I took the “Neon Boneyard” Tour at the interesting Neon Museum a few blocks from Fremont Street.

The Boneyard is an outdoor lot of historic neon signs from defunct Vegas casinos and businesses. A few are lit up at night. One laying on its side unlit formed the words “El Portal”. I asked the tour guide who told me it is most likely from the theater.

There are some photos of the sign in the Boneyard if you do a Google images search using the terms “Neon Boneyard El Portal”.

To me it looks like it could be the sign in the photos section in these older photos: one, two.

That could mean the similar looking sign on what is now an Indian/Native gift shop is a reproduction or a separate remainder still intact from its days as a theater?

Fremont Street is now a pedestrian only/closed to vehicles entertainment district called the Fremont Street Experience covered by the “Viva Vision” canopy video screen, three stages with live bands, some street performers, and a zip line called “Slotzilla” you can ride on between the street and the screen.

When I was there on August 19th and 20th of 2017 during my first trip to Vegas, I enjoyed the Linkin Park and Tiesto performances on the screen, the different live local bands, the people watching, and the neon lights on the remaining casinos with the feeling that there is still some history left. I liked it a lot more than The Strip.

I’ve since watched Youtube videos of what Vegas used to look like that left me feeling like I missed something that is now gone. I also would have liked to have seen Fremont Street when the cinemas were still operating.

New update (June 23,2018) – The “Indian Arts & Crafts” store moved next door. (East of the former theatre.) When this was done, I have no idea, but I’m guessing it was very recently (around the time that the new White Castle joint opened up – same block). Anyway, maybe the El Portal will return as a movie house. BUT here’s the thing – it would, more than likely, cost big bucks to do so. Upon looking inside (from outside), it needs, among other things, a new snack bar area (as the old one was, obviously, removed).

I understand that the El Portal will be occupied by a Taco Bell and Wahlburgers now that the Indian crafts store has vacated, which doesn’t bode well for preserving the place. I hope the world’s nicer to me when I turn 90 years old.