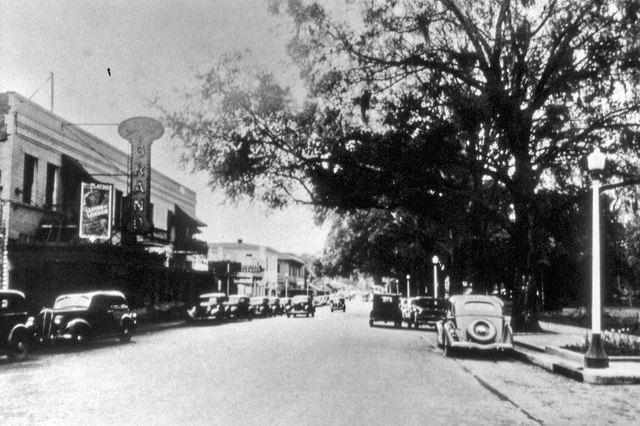 Orlando had the Grand Theatre, but neighboring Winter Park was proud to have the Baby Grand Theatre which opened on February 1, 1917. It was rebuilt in 1927 and was briefly taken over by Universal Chain Theatrical Enterprises Inc. It was soon taken over by E.J. Sparks, a subsidiary of Paramount Pictures Inc. and was closed in 1940. It was briefly reopened in 1947, but closed within a year. There is one picture of the exterior displayed at the Maitland Historical Museum.

Per a special exhibit at the Winter Park Historical Museum, the Baby Grand was built in 1911 for silent pictures by Mr. Beacham, who also owned theatres in Orlando. It had an organ, but it must have been small because the theatre was tiny.

Universal Pictures took over operation of the Baby Grand in early 1928, according to this item from the January 22 issue of Film Daily that year: “Orlando, Fla.— Universal’s new Baby Grand at Winter Park, the millionaire winter colony closely adjacent to Orlando, opened last week.”

This web pagehas a very early photo of the Baby Grand, and says that it opened on February 1, 1917, and was rebuilt in 1927 (which must have been the project for Universal noted in my previous comment.)

Universal’s control of the house was brief. The June 28 issue of Film Daily reported a deal in which E. J. Sparks took over most of Universal’s theaters in the region, and the Baby Grand was not listed among the few that were excluded.

The Baby Grand closed in 1940 when the Colony Theatre opened, but had a brief afterlife in 1947 showing westerns and adventure films for less than a year.