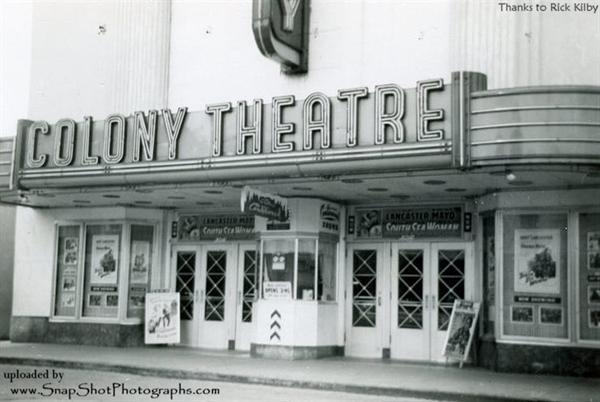 The Colony Theatre opened in 1939 and closed on September 28, 1975. The building is now used as a retail store called Pottery Barn.

Here is an old postcard:
http://tinyurl.com/2p5hwg

I have great memories of the Colony during the sixties. Every Tuesday morning during the summer they had kid shows sponcered by RC Cola. All you had to do was to collect six RC bottle caps and you got in free! The show usually started with a cartoon, a race reel and then the feature. The race reel, which ran about 8 minutes, would show a different race every week. I think there were about 10 total; cars, boats, rollerskates, etc. This series must have been produced in the 30’s. At the end of each race the winner in the film had a number on his back and every kid would look inside of his popcorn box for the winning ticket! Sounds kind of hokey now, but if you’re a 10 year old kid it’s exciting.

In the early 70’s, I was a relief projectionist at the Colony. Whenever one of the two projectionists, Art Pope or Ralph Mays were called to work at the Municipal Auditorium, I would be called in to cover. Located up stairs behind the balcony was the projection booth. It looked like a time capsule from 1939. At the time, there were strick fire laws. Since most of the films were nitate, the booth had to be fireproof. The entry door was steel and very heavy. On every porthole there was a fire shutter attached by a cable to a counterweight. If a fire did occur, the lead fuse would melt and the counterweight would fall closing all the fire shutters. But they had so many coats of paint on them, I doubt any of them would have closed! The projection equipment consisted of Super Simplex’s, Photophone 9050’s, and Peerless Magnarc’s. The lamphouses had control knobs made of swirled yellow Catalin and an etched glass sign on top that would illuminate when the carbon was struck! In the next room was an enormous generator to supply DC current for the carbon arcs. Sometime in the mid-fities they installed Motiograph magnetic penthouses for the magnetic-track films. The auditorium was not ornate. It had a Cinemascope screen and no curtain. The first big picture I ran there was Fiddler on the Roof, three shows a day, a roadshow engagement in magnetic stereo sound!

By 1975, the multiplexes and twins were stiff competition for the old downtown houses and the Colony finally closed. The new owners gutted the theatre and put in a restaurant upstairs and boutique mall downstairs. Outside, the blade is still intact with different colors of neon, a reminder of it’s past life.

This one is an art deco beauty! Would like to see it next winter while visiting friends in Mt Dora.

Here are my pictures from November 2011.

1941 Florida State Theatres ad, showing all of its theatres in Orlando/Winter Park, posted to photos section.

Circa 1955 postcard added, previously posted link from 2007 is now dead.

It’s an historical theater on Park Avenue that’s retained the same architectural design despite being converted into a Pottery Barn. Check out how the theater and surrounding area looks today at http://aroundwinterpark.com/park-avenue.

Here’s a new 4-page 50th anniversary FIDDLER ON THE ROOF retrospective featuring a roadshow playdate chronology and historian Q&A. The Colony’s run is mentioned in the piece.

It would be great to have some photos of the interior before it was gutted. Did the Colony have a balcony?