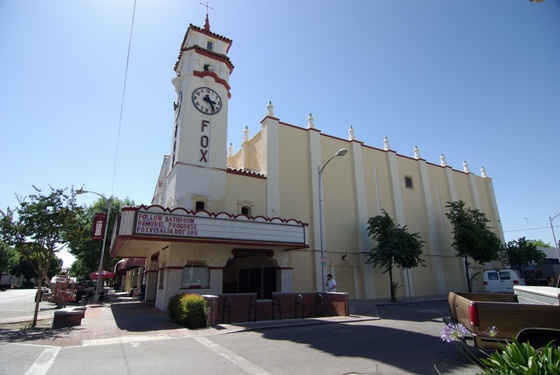 From abc30.com: Employees of the historic Visalia Fox Theatre are moving forward after suffering a major setback last week.

Thousands of gallons of water flooded the basement and the old orchestra pit last week after a pipe burst. On Monday, theatre officials are still not sure about the extent of the damage.

This isn’t the first time the Fox Theatre has had a flooding issue. About a year ago, an abandoned water line in an exit hallway started leaking into the same basement.

Theatre employees said they’d like to replace their whole plumbing system but that takes a lot of time and money.

Films, concerts, special events – the Visalia Fox Theatre is home to all of the above. But below the stage floor, a very different and unexpected performance was in the works last Wednesday.

A piece of the theatre’s original water pipe burst and caused 15,000 gallons of water to flood the basement. The wave of water worked its way into the old orchestra pit, threatening both their prized organ and hydraulic lift system.

“About an inch from the organ itself,” Erin Olm-Shipman with the theatre said.

Olm-Shipman said they were fortunate that their operations supervisor spotted the problem, but the source of it was not so easy to find. The short-term solution involved using buckets to remove water from the pit and a sump pump to keep the water level from rising in the basement.

“The section of pipe they removed was about right here,” she said, pointing to the location.

Workers had to cut through several layers of wood and concrete to find the affected area and underneath the original stage. And workers had to move quickly because there were events scheduled through the weekend, including a double Tulare County Symphony Holiday performance.

“So, we definitely needed to take care of the flooding, clean up the mess, locate the broken pipe, repair that, repair our stage and get our heating system up as soon as possible, and get running water back in the auditorium as soon as possible,” Olm-Shipman said.

However, the shows went on and were a success. Fox Theatre employees are still waiting to see what insurance can cover but know for a fact the cost of cleaning up and repairing the stage floor will be thousands of dollars. Perhaps, though, it’s simply the price to pay to keep the history of the Fox alive.

“The old girl you never know what she’s going to throw at you,” Olm-Shipman said. “But I think everyone that has been here for a significant amount of time knows that she will throw you something. She will surprise you.”

Employees will be putting in a monitoring system in the basement, which will be connected to their alarm system. That way they’ll be able to respond quickly to any leaks or flooding. They’ll also be testing the organ and lift system for any damage soon.