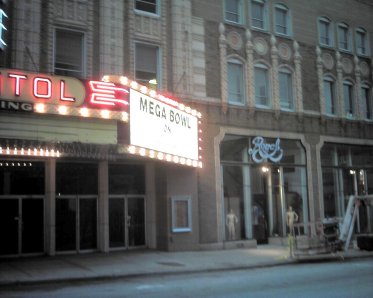 FLINT, MI — The Capitol Theatre marquee is now fully functioning and now every light bulb lights and moves—even the light bulbs under the marquee. The message on the marquee reads “MEGA BOWL ON CLOSED-CIRCUIT TV”. The Mega Bowl is the championship game in the film “Semi-Pro“ about an American Basketball Association basketball team called the Flint Michigan Tropics.

The theater entrance and rest of the theater building are also getting spruced up. The storefronts are getting vintage signs installed. Many of the signs are borrowed from Bob Perani’s collection from his Dort Mall. The film is scheduled to be released on February 29, 2008.

A news report (including video) from WJRT reports that the filming of scenes for “Semi-Pro” will take place at the Capitol Theatre on Wednesday and Thursday, May 2 and 3. Because the Capitol Theatre building is across Harrison Street from the Mass Transportation Authority transporation center, bus boarding and transfer locations will be moved to alternate locations for the duration of the film shoot.

On the first of two days of scheduled filming in downtown Flint, I got as close to the Capitol Theatre as I could to take pictures. East Second Street was completely closed between Saginaw Street and Harrison Street. I took these pictures across Harrison Street from the theater building. You can see the storefronts with the signs and window displays set up for the movie. One of the real storefront tenants,Flint Club, sent me the following message:

As many of you know, the movie “Semi-Pro” is being shot (in part) right
here in Flint! There have been many days of preparing and filming in
the area, including “snow” on the ground in downtown Flint in May.

Here at Flint Club, we are excited to have our world headquarters
decorated by the film’s crew to be the “Royal” woman’s clothing shop –
complete with window displays showcasing 70’s fashion and a large neon
sign above our doorway. The Capitol Theatre marquee received a face-
lift for the movie and looks great!

It’ll be great to watch the movie next year and recognize lots of
familiar places and remind us of Flint in the 70’s.

If you look closely at the marquee, you will see that “coming” to the Capitol will be “The Bad News Bears” if you recall my earlier report.

(Thanks to Gary for the pictures) 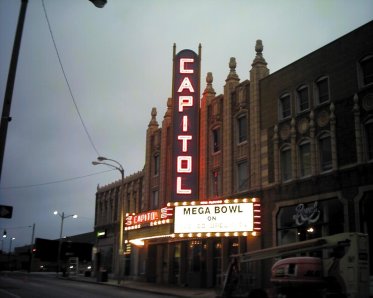 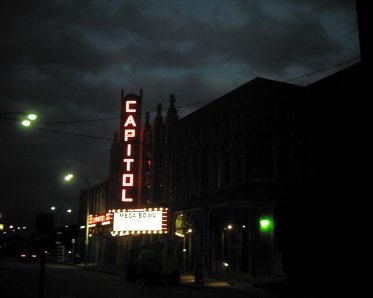 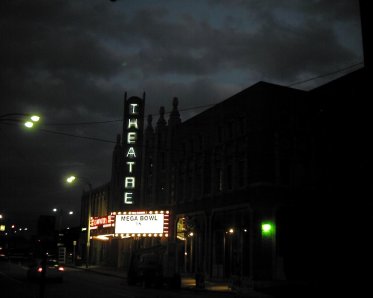 Thanks so much. Looking at those pictures, for a moment I could believe…

A good chunk of this film “Semi Pro” was shot here in Los Angeles. I was an extra at the film shoot which happened about five-six weeks ago. These were the interior scenes for the supposed basketball arena in Flint, which was actually a small gymnasium at the Los Angeles Fire Academy (!) that was made up to look like a 1940’s era auditorium in the 1970’s.