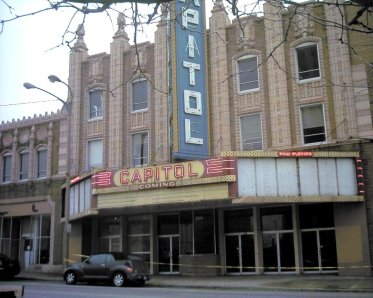 FLINT, MI — The long neglected 1940’s vintage marquee of the Capitol Theatre, built in 1927 and designed by John Eberson, is getting a $20,000 makeover for a movie cameo in the film “Semi-Pro “. A crew from the local firm Signs by Crannie is replacing lights and wiring as well as installing a new blinking mechanism.

While the marquee and blade sign received new neon in 2004/2005, no additional work was done on the marquee until now. The blade sign got a new paint job in the 2004/2005 makeover. According to Troy Farah, whose family owns the theater building, the marquee hadn’t fully functioned since the early 1980’s at the latest.

For the film role, the theater’s marquee will indicate that it is playing the 1976 film “The Bad News Bears “ as an inside joke and tribute to Jackie Early Haley, one of the stars of "Semi-Pro” who as a child actor appeared in “The Bad News Bears.” The film takes place in 1970’s Flint, Michigan and other location scenes are getting makeovers as well.

More details from The Flint Journal.

Today, I returned to the Capitol Theatre and was pleased to see the Signs by Crannie crew at work rewiring the marquee. They had installed new fluorescent lamp sockets and had started to install the new sockets for the racing lights.

Studying the archeology of the marquee, it looks like it was originally backlit with light bulbs in the 1940’s and was retrofitted to use fluorescent backlighting around that time the theater was remodeled in 1957.

(Thanks to Gary for providing the photos.) 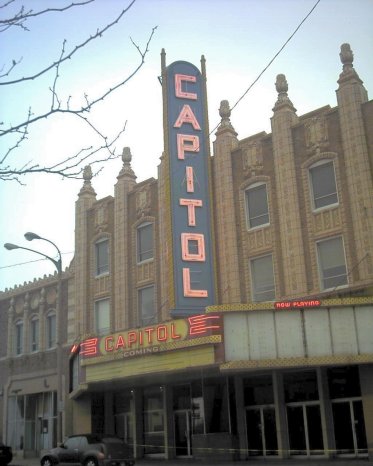 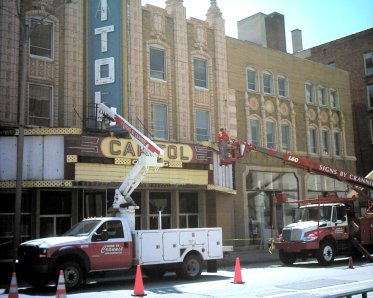 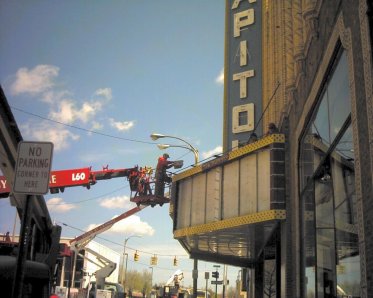 Many thanks for this. So good to see something positive on Flint movie theatres.

Nice to see this spricing-up of the Palace. I visited it with the Theatre Historical Society in 1995. The whole building is highly restorable. Most, if not all, of the interior plasterwork is there, and the atmospheric auditorium could easily be brought back with a lot of paint, and new wiring.