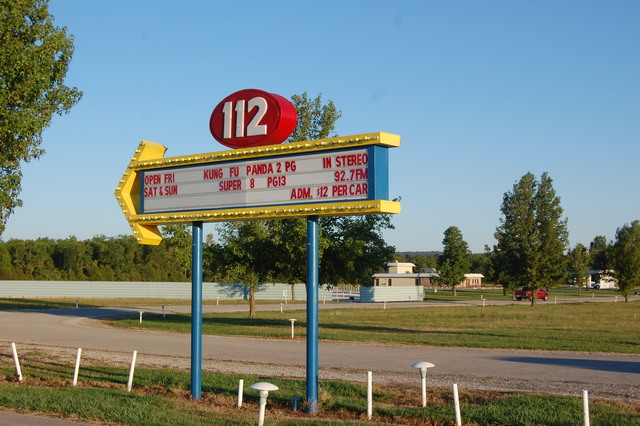 The 112 Drive-In was opened in 1980 and is is a 420 car single screen ozoner. It is open from March thru mid November. During the summer it is open Thursday thru Sunday other times Friday thru Sunday. It has both FM sound and the conventional drive-in speakers. At one time they had ponies for the children to ride before shows and during intermission. The 112 Drive-In is one of our drive-ins still operating in Arkansas. Admission is $6.00 a carload.

I used to work at the 112 back when I live in Fayetteville….worked a couple of summers back in the early 90’s. Worked the box, the concession stand and quite a bit of security…..was a good parttime job to supplement income and all the free passes to the local theatres i could want.

In looking at an aerial it used to a twin at one time.

Yeh what’s the deal with the field layout? Looks like a twin to me.

I emailed them….hopefully we will have an answer. I don’t have history on the drive-in, maybe it opened has a twin?

The plans called for a twin. But it was never finished. I almost had the owners ready to finish it, but unfortunately, the city of Fayetteville added so many restrictions to getting a permit. That the cost became way too much.

The ramps were already built. We only needed projection equipment and a screen. The Roads were there as well, but the City of Fayetteville wanted us to Build a lake to retain water, to dig out the culverts under 112, that they just had the car lot replace with a double culvert and for us to install 1 very large culvert. We were to put a sidewalk from Nelms to the Glass company, to put in an irrigation system and water line and plant trees all across the HWY 112 frontage, So that kind of killed it as ever being possible.

Boy, all those restrictions sound like right here in Olympia, Washington. We must have gotten our city council from you guys.

From Anthony Bowling at the 112 Drive-In
They have converted to digital. Using a barco 32B and Dolby Server.

According to a great retrospective by NWA Alive with the 112 owners (you can find the video on Facebook), the 112 opened in 1980.