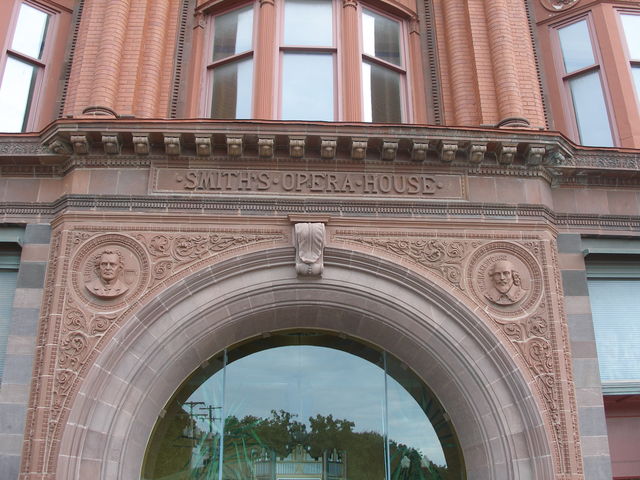 Built in 1894, the Smith Opera House operated as an opera house and vaudeville theatre until it became the flagship of the Schine Circuit Inc. on March 17, 1931 opening as the Geneva Theatre with Buster Keaton in “Parlor, Bedroom and Bath”.

This majestic opera house was renovated by architect Victor Rigaumount in a unique combination of Art Deco and Baroque motifs. There are also evidences of Victorian and Moorish influences. By the 1950’s it had been renamed Geneva Theatre.

This theatre is registered with the Smithsonian as well as the National Register for Historic Places. Famous names to have graced its stage include: George M. Cohan, Isadora Duncan, Al Jolsen, Itzhak Perlman, Wynton Marsalis, Billy Joel, and Dave Matthews¡just to mention a few.

Located in downtown Geneva at the head of beautiful Seneca Lake, the Smith Opera House was proudly entering its 107th year of operation in 2001. A $2.5 million restoration campaign was almost completed.

The opera house continues to show a wide variety of live performances year-round. On weekends, the theatre shows movies on what is the largest indoor movie screen for almost 100 miles around.

Yes, it was one of the great heartbreaks when the reigning board of directors chose not to replace the marquee. The argument was made that it was Schine’s Geneva Theater for FAR longer than it was Smith’s Opera House – but at that time they were enthralled with the concept of an “opera house” – choosing to ignore the fact that the designation was more properly “vaudeville house”.

But for those of us who celebrate the Schine days, the interior is virtually unchanged from the 1931 opening night design and splendor. Some may argue that it is “the best of both worlds”…. i don’t… But some may! ; )

what the dimensions of the screen?

Well neither of these marquees could come close to the stunning original Schine marquees. They knew how to do it right in those days!

I agree the building is great but the new marquee looks good but does not fit in.

Ranjit Sandhu’s partial list of the works of Leon H. Lempert & Son attributes the design of the Smith Opera House building to Pierce & Bickford, but says that Leon H. Lempert, Sr., designed the auditorium and stage of the theater itself, but he doesn’t cite a source for the claim.

The March 10, 1894, issue of The Engineering Record does note Lempert as the architect for William Smith’s proposed opera house at Geneva, but doesn’t mention Pierce & Bickford. It is possible that Smith decided to change architects, though its also possible that Lempert served as consulting architect for the theater portion of the building.

In any case, even if Lempert did design the auditorium, Victor Rigaumont’s later remodeling completely transformed the interior, so it’s unlikely that anything would remain of Lempert’s design today.

During the years 1918 and 1919, the Geneva Daily Times carries ads for the Regent and Temple Theatres and for a vaudeville and movie house called the Strand Theatre, but I find no mentions of the opera house during that time. The ads for the Strand vanish by 1920, and the Smith Opera House reappears. I wonder if they were the same theater?

Photo as the Geneva in 1964 added, Via Bob Rokitowski‎.