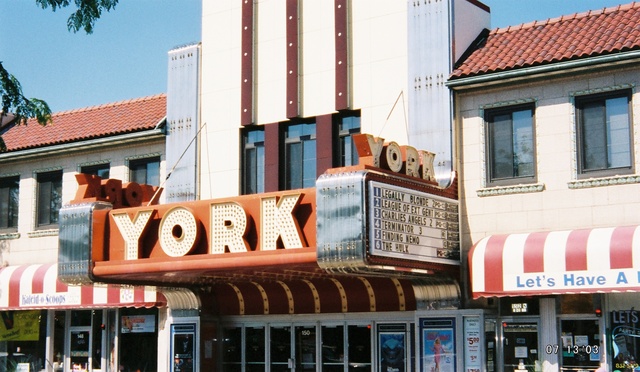 Built in 1924 and designed by architect Elmer F. Behrns, the York’s interior and exterior were updated in 1938 by architect Roy B. Blass in Art Moderne style and the seating capacity in the single screen was for 1,100. It was equipped with a 3 manual, 10 rank Barton theatre organ.

During the later renovation, the interior of the auditorium was returned to its original aesthetic. In 1993, the York added two more screens when Classic Cinemas bought the adjacent building and incorporated two new screens into the York. In 2004, the number of screens was increased by two more, and two years later, another two screens were added, bringing the total number of screens at the York to nine. A tenth screen was added on November 16, 2011.

Today, seven of the ten screens are stadium seated, and three auditoriums have digital projection and 3D. The York Theatre once again has a pipe organ, which is located on a lift in the original orchestra pit. It is a Barton, 2 Manual 7 Rank, which came from the Rialto Theatre, Champaign, IL. There are a number of artefacts which have been rescued from other historic theatres. THSA (Theatre Historical Society of America) was headquartered at the York Theatre for many years and had their office and museum located on the second floor. They moved to Pittsburgh in 2016.

Were the new additions added on to the north side of the original theatre? Towards W 2nd St.? Just trying to figure out from satellite shot which parts of the buildings make up the 9 screens.

There were multiple additions to the York. The original theatre was split into 3 auditoriums (now numbered 3,4,5). An addition was put on the north side of the original theatre adding two screens where the candy store and parking lot were. Then a 2 screen addition was put on the south side of the original space (where Leonard’s had been). These were larger stadium seating houses. Then the addition on the north side was remodelled. Tearing down one auditorium and encompassing the rest of the parking lot behind the stores. This gave 3 more stadium seating houses. Later improvement to the 3 auditoiums in the original space included light lock entrances for the 2 closest to the main lobby. It also included converting #4 (the front half of the original auditorium) to stadium seating.

Wow, thanks MM….that’s a lot of additions. Still, it’s nice that the theatre is still operating in this day and age.

Nice pictures, love all that neon, glad to see thats its still up and running.

I like the theatre; saw “The Hunger Games” there.

Apparently the York Theatre is losing a longtime upstairs tenant.

As of late 2019 all auditoriums have heated recliners with dual motors, one to recline, and one for the power headrest. Also, they converted two screens to XQ their premium large format “Xtreme Quality” with 50+ foot microperf matte white screens, Christie CP4440 RGB laser projectors, ultra high-contrast lense, DTS:X 24 channel immersive sound. They have also added alcohol sales to their offering.

This was a second run theater for years, but switched to first run movies sometime in the 90’s.