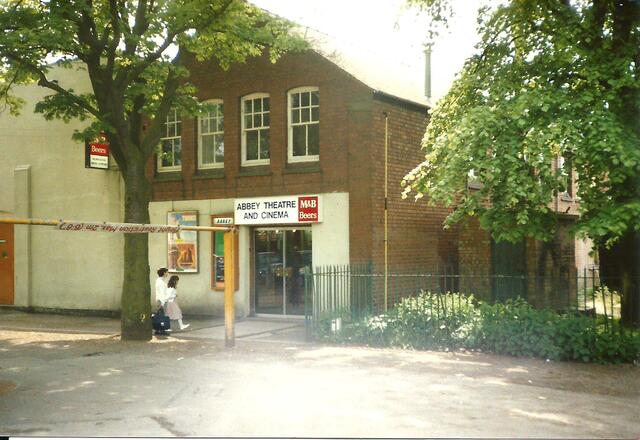 In Nuneaton, Warwickshire, Nuneaton Arts Council was founded in 1969 by a group of local arts devotees who saw the need to provide a focal point for all aspects of arts in the town.

This opened in 1974, the first performance being Nuneaton Pantomime and the Revue Society’s production of “Finian’s Rainbow”.

There were some film shows, initially using 16mm, but these came to prominence following the closure of the Ritz Cinema in June 1984 (see separate Cinema Treasures entry), when the Arts Centre took on the mantle of being the town’s only cinema, albeit interspersed with other activities.

The Abbey Theatre and Cinema continued until the ABC multiplex opened at Bermuda Park in May 1999 (see separate Cinema Treasures entry).

The Abbey Theatre continued with live performances, suffering the ups and downs of a regional theatre, including a near closure in 2003 when asbestos was discovered in many parts of the building, some of which had been disturbed during recent works to upgrade the facilities. The doors were closed for six months, but a rescue package was agreed with the local authority, the building’s landlord, and the theatre re-opened in the early-autumn.

The Abbey Theatre has not looked back since. However, in February 2014 it was announced that Nuneaton Arts Council was working in conjunction with Nuneaton and Bedworth Borough Council to design and build a brand new community arts complex within the town’s ring road, which would provide many more opportunities for a programme with increased quantity, quality and diversity.

Although that project has yet to be fully realised, in 2019 Nuneaton Arts Council became associated with the Transforming Nuneaton Project, and the prospect of achieving this long-term goal for the Arts Council to move to larger premises was, at that time, thought to be truly in sight.