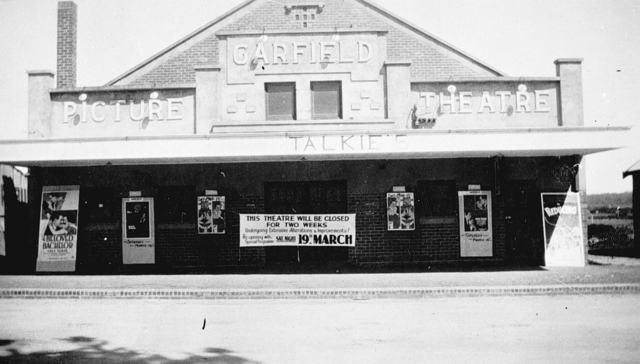 The Garfield Picture Theatre was opened on 22nd December 1924 with a ‘Grand Ball’. It was built by Martin O'Donohue. It had 800 seats, all on a single floor. In 1923 one of the first films to play was Rin Tin Tin in “Where the North Begins”. In May 1931 it was equipped for the ‘talkies’. It went through several independent operators over the years and was closed in 1962. It re-opened in 1970 and operating weekends only, it closed on 1st January 1974. The building then became a furniture store for many years.

It was purchased in 1999 by local residents Fred & Susie Perez who have spent almost a $million refurbishing the building over 17 years. It re-opened on 3rd July 2016 and presents live performances and public functions. It is hope that a digital projector will be purchased in 2018, to allow movies back in the building again.

Greg Lynch says – The Garfield Picture Theatre is a significant Heritage Building – Here is an expert opinion given prior to refurbishment by Graeme Butler & Associates dated 1996 & published on line by the Cardinia Shire – Themes: Railway townships & Picture theatres – The Garfield Picture Theatre, built between 1924 & 1925 for a Mr. Donohue, is significant to the Cardinia Shire as an unusually substantial country cinema dating from the Australia-wide boom in cinema building in that decade. It is significant as one of the few picture theatre buildings remaining in the shire. The Garfield Theatre was of historical significance as the first supplier of electric power to the town. The building has significance as a major element in the Garfield commercial street scape which dates predominantly from the 1920s era. It is significant, too, for its near original exterior with the old name on the facade, although now used as an antique shop. This is a large well-preserved and gabled red brick theatre, with a spartan but close to original interior. The words `Garfield Picture Theatre' are in large raised cement letters on the front of the building. The external form is typically gabled with a piered and parapeted cement and brick (over painted) foyer and office wing at the front; this is composed in a tripartite form, with a raised panel at the centre and capped piers at the sides. A deep cantilever street verandah extends from the front, with an ovolo molded and paneled fascia. The front door and window openings appear to be as original and a red brick chimney is a practical touch to one of the rooms. Behind is the high gabled of the auditorium with its cemented capping and some cemented moldings over a vent in the gable-end. The roof is clad with corrugated iron. Inside the roof is unlined with steel-trusses exposed. Some plaster detailing exists around the proscenium and other parts of the interior. The building is externally near original except for the painted brickwork…This place/object may be included in the Victorian Heritage Register pursuant to the Heritage Act 1995. Check the Victorian Heritage Database, selecting ‘Heritage Victoria’ as the place data owner. For further details about Heritage Overlay places, Heritage Study/Consultant Cardinia – Cardinia Shire Heritage Study 1996, Graeme Butler & Associates, 1996.