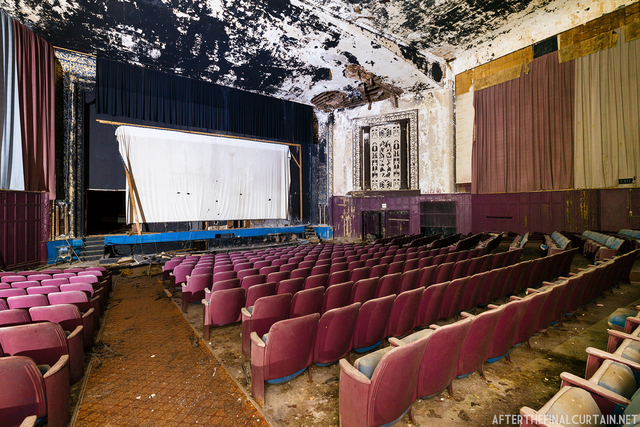 The Fitchburg Theatre was opened February 7, 1929. I believe the last time it was used was in the late-1970’s or early-1980’s. It was a nice theatre with a balcony. I’m not sure if it is owned by the bank or the City of Fitchburg. I heard the the renovations were too much for the City.

It is right on Main Street across from City Hall. The last thing they did to it was put up a fake storefront so it wouldn’t look so shabby during the Longsjo Bicycle Races! (That was a few years ago).

In 2018 it was purchased by Fitchburg State University and renovations began in 2022 to convert it into a performing arts space.

Here is a July 1960 ad from the Fitchburg Sentinel:
http://tinyurl.com/y88cmbt

I worked at the Fitchburg Theater from 1978 to the middle 80’s and what a time it was the concerts like Devo,Jay Ferguson,Johnny and Edgar Winter. Awesome. And the midnight movies The song remain the same and the Rocky Horror Picture show. But in 1980 the theater was turned into a 3 theater I remember caddy shack was there at the time the guy who owned it was Bill Haney. Then he sold it to USA cinemas and one night they had a party and it was the beginning of the end. They used water hoses and cut the big screen up what a waist. I was in the theater last summer The downstairs is all gone the big screen is gone. the other 2 theater’s are still there. I got a lot of old stuff out of there last year lots of memories. Buy the way Brian I am sure I remember you.

I have great memories of the Fitchburg Theater. When I was little theyâ€™d play 2 movies on the Saturday matinee & raffle off a bicycle between shows. And I worked as a projectionist there for about a year during high school. Playing first run movies like Body Heat, Arthur, Raiders of the Lost Ark, Halloween & the Empire Strikes back. I was trained on the carbon arc projectors in that oven of a projection booth by a genius named Leo & ate a lot of Espresso pizza with Frank. Bill was the owner & his brother Brian & Chinky ran the place. (Had to drop the keys of to them after we closed at night to TWEEDS restaurant.)
I really loved that beautiful old place, but was never smart enough to take any pictures of the inside before it was ruined. (Which really was kind of stupid considering Leo was teaching me photography at the time.)
Try to explain to a kid today how immense & ornate that screen/stage was. How incredible the acoustics were orâ€¦..how terrifying it was to walk through in the dark, barring all the doors after closing, while Dave (another projectionist) played the theme from Halloween.
It really was something standing at the top of the balcony, just below the projectionist booth stairs & being able to recite every line of Raiders while downing warm soda & stale popcorn. It was a time & place Iâ€™ll never forget.
Anyway. I really enjoyed this page. Thanks for the memories.

The Fitchburg Theatre section of the Old Theaters of Fitchburg web site (the same site petermetzke linked to in an earlier comment) says that the house opened on February 7, 1929. That makes it the most likely candidate to have been the theater project on which construction had just begun in 1928, according to an item in the July 8 issue of The Film Daily. The new house for the Kenmore Realty Company was to cost $175,000 and had been designed by Boston architect George W. Jacobs.

The Fitchburg Theater, specifically this one, actually has/had two screens. I toured it in 2014 and only came out with one worthy photograph (which I uploaded). The lobby is a junk storage area, the first screen has been torn down and the second screen is still up with all its graffiti in tact. Another building that hasn’t been cared for and is overrun with mold. It could still be saved, and I hope someone does.

I was just wondering if its possible to get in? The history of it is fabulous and it would make a wonderful backdrop to a student film I’m making

We have the wrong address for the Fitchburg Theatre. It was at 717 Main Street, just a couple of door down from the the Saxon Theatre. The building is currently under partial renovation to provide space for Fitchburg State University, and there are long-range plans to renovate and reopen the theater itself.

It looks, from Matt Lambros’s article, that Fitchburg State University, which recently bought the entire block, is planning renovations to both the overall building and the theatre itself. He also has some great photos, both exterior and interior!

The Fitchburg Theatre has opened as the Fitchburg IdeaLab! Parts of the building have been opened as creative and innivative lab space, and the auditorium will be renovated as a performing arts center.