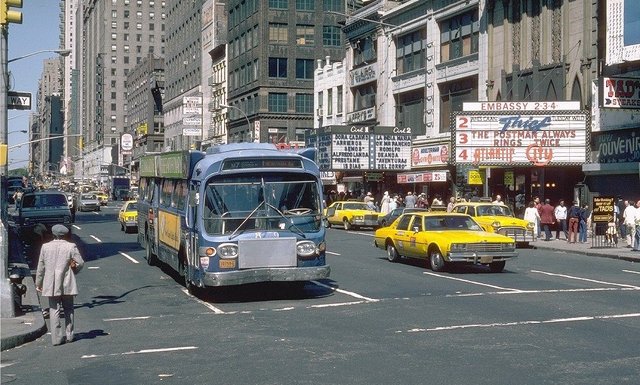 Originally opened on January 10th, 1910 as the Columbia Theatre on Times Square at the northeast corner of W. 47th Street and Broadway/7th Avenue inside a steel frame office building. It operated as a burlesque theatre and was designed by noted theatre architect William McElfatrick.

Walter Reade bought the theatre in 1928 and rebuilt it into a movie theatre. A major renovation was undertaken by architect Thomas W. Lamb who removed the two original balconies and placed a single balcony in an Art Deco style auditorium which had 2,300-seats. It reopened on October 23, 1930 as the RKO Mayfair Theatre, with RKO as the operator and the movie “Check and Double Check” starring Amos & Andy. In 1935 it was taken over by Loew’s Inc. on a 10-years lease. By 1950, it had been taken over by the Brandt Theatres chain.

On November 24, 1976, the theatre became the Mark I,II,III. The triplexing was crudely done by putting a wall dividing the balcony down the center, creating a very narrow tube that inclined upward. One entered near the screen and had to climb very steep steps to reach the seating area. Seating was provided for 540, 300 & 300.

It was shuttered for several years, until around 2007, when it was virtually gutted and converted into a Famous Dave’s BBQ Restaurant. This had closed by May 2013 and the building was demolished in spring of 2015.

to Mikeoaklandpark- per your comment I find it fascinating that a big studio film would open on a roadshow engagement in one big city but not another big city. I wonder how often that happened?

Didn’t Krakatoa open continuous run at the Warner Cinerama in NY and roadshow in LA?

And then you had the films that opened at two theaters in one city and one was road show and the other continuous run.

Since no one else chimed in, I should mention that “MAGNIFICENT MEN” indeed did have a Philly Road Show run at the Trans-Lux.

I have often lauded you on your considerable font of knowledge,
to which a question. what are your thoughts on why a studio
would exhibit a film on a roadshow basis in one major city
but not another major city?

Thanks, bigjoe. From what I can tell, the most likely reason was a soft opening in NY or LA and/or poor reviews. The available venues were also a factor. Some cities had limited theatres that were practical for Roadshow use. For example, a prized booking at RADIO CITY was guarantee that the film would not Roadshow in NY since the place has so many seats plus a live show and a super-extended run was not practical. Some films went on to have successful runs even after poor advanced sales, so they proved to not be good Roadshow prospects after the first major markets failed to generate significant advanced sales. Near the end of the Roadshow era, studios had to re-evaluate the marketing costs and extended profit delays of Roadshow runs for films like “KRAKATOA”, “ROMEO & JULIET”, “THE LOVES OF ISADORA”, “CABARET” and “PATTON” since core movie-going audiences were getting younger and less likely to plan movie night in advance.

many thanks for your learned take on the subject. an interesting note on The Loves of Isadora. the only engagement the original cut or proposed roadshow cut of the film in the entire U.S. was at the now El Capitan Theater on Hollywood Blvd.

Otto Preminiger’s film The Cardinal opened here Dec. 1963 on a roadshow engagement. did his film In Harm’s Way open here as well?

In Harm’s Way did open at the DeMille, on April 6, 1965. It also played at the Coronet on the east side.

I just posted the opening day ad in Photos.