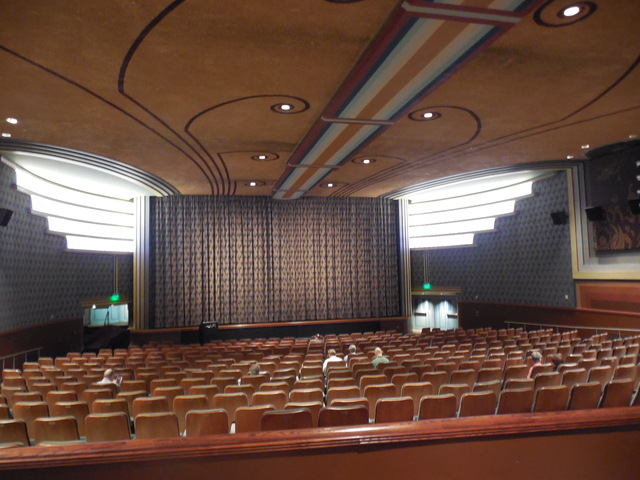 Operated by the American Film Institute, the AFI Silver Theatre is a film house and education and cultural center. Arthouse films, classics, and film festivals are presented in the historic theatre that opened 1938 and in the two auditoriums that opened in 2003. The AFI Silver is near the Silver Spring stop of Metro’s Red line. Silver Spring is a suburb of Washington, D.C.

The Silver Theatre opened September 15, 1938, with 1,100 seats and “Four Daughters” starring John Garfield and Claude Rains. The Silver was built by a local movie theatre operator W.S. Wilcox, but quickly turned over to Warner Bros. The theatre was designed by fame theatre architect John Eberson, one of his later classics. The historic building has a nautical theme including its mast like vertical sign and imitation portholes. When seen from above, the building mimics the lines of a ship. Eberson designed it to give moviegoers the feeling they are entering a cruise ship. The movie screen was designed to appear as if it were floating in front of the auditorium.

In 1984, objecting to the preservation of the theatre, its owners demolished some of the facade including the vertical neon town and tile mosaics. As demolition crews punched holes in the brick facade in August 1984, frantic Silver Spring residents rushed to the theatre to plead that demolition be halted. A ‘stop work’ order from Montgomery County saved the theatre from demolition at that time. The infamous, deliberate vandalism of the theatre by its owners became a rallying call to those who cherished it. K-B Theatres closed the Silver Theatre in 1985. Boarded up, its fate was uncertain. The Silver Theatre was added to the National Register of Historic Places in 1988.

Richard Striner, a founder and former president of the Art Deco Society of Washington led a 19 year campaign to save the theatre. In 1998, Montgomery County began negotiations with the American Film Institute to reopen the theatre. The AFI were previously based at Washington D.C.’s Kennedy Center since 1975. Renovations by Washington DC based architectural firm Gensler & Associates began at the Silver Theatre in 2001. The five year construction project cost twenty million dollars and was totally funded by Montgomery County. County executive Douglas M. Duncan led the charge to fund the theatre’s rehabilitation. The AFI Silver is the flagship (pun intended) of a one million public & private rejuvenation of the downtown Silver Spring.

The historic Silver Theatre was ‘rehabilitated’ rather than replicated, because it isn’t an exact replica as it was. The original blueprints were discovered, and reviewed, along with vintage photographs. When built, the theatre had 60 colors in the interior. The reincarnation has 40 colors including the blues, yellows, reds and deep browns typical of 1930’s Art Moderne. Peacocks and shells can be seen on the wall decor. A new larger screen was placed in front of the original smaller screen. The original carpet was replicated.

The AFI Silver reopened April 4, 2003 with a gala including a screening of the restored classic “The Oxbow Incident” and actor/director Clint Eastwood receiving the AFI Silver Legacy Award. With photographs of its facade and auditoriums, the AFI Silver Theatre is depicted in the 2004 book ‘Cinema Treasures, A New Look at Classic Movie Theaters’.

Concessions that can be enjoyed in the cafe or auditoriums include beer and wine, in addition to food and other drinks.

if you want the full experience at home, get the 4k bluray. From what i heard, both the bluray and the 4k bluray have the sound mix sourced from 70mm six track elements. The 2001 special edition DVD’s sound mix was remixed for the release.

Star Wars fans..the complete saga is being shown here for one long weekend starting 5/3. I’m wondering why they don’t do this closer to the last film coming out this December. It will still be the 20th anniversary of the start of the middle trilogy.

I don’t recall #1 having EX, yes it has the THX..almost audio nirvana. What I’m wondering if Episode 2 will show here with the same aural power as I remember watching it at the Senator and at the Annapolis Mall in DP. The scene I’m talking about is when Jango Fett sets off those weapons against Obi Wan in the asteroid field with that super loud BONNNNNNNNNNGGGGGGGG. The visual and sound effects are so powerful that you almost weave and bop in tune with the ships navigating avoiding the bombs and asteroids. Then there’s the low, but powerful woooosh of Windu’s light saber just before the Jedi knight fight in the arena.

I remember the last time they had the SW movies here they were sell outs. I suspect this will be the same. Its too bad, they couldn’t get someone, anybody..actor or production staff, from some of the movies for a Q&A ala the 2001 retrospective in recent years.

The photos on Film-Tech list an SA10 for the Historic theatre. That’s the EX decoder.

Too late for me, rl. I wanted to catch at least one of the films but couldn’t. Oh well. Maybe they’ll have the films again prior to the Dec opening of the ‘last’ Star Wars film.

Looking at the current summer programming roster, nothing really worth seeing. With 35 yr and 25 yr and older retrospectives, I can think of many good films from ‘94 and '84 they could have that are worth experiencing on the big screen here.

Joker is opening here Thu in 70mm. Its a rarity to have the AFI run a more commercial movie here with the 20 screen & Imax Lite Regal just around the corner. With so much bad news reported these days, I don’t know about a dark film and judging from the trailer, a dark character study and probably an acting (insert award title) nomination for sure.

Licorice is opening 1/1 in 70mm but with one measly 6:15 pm 70mm showing. Rest of the shows are DP.As of this writing, no other 70mm showings. Very strange.

I find the marquee very interesting

Here’s the link to an article on 70mm presentations in the Washington, DC region which has been updated to include AFI Silver’s 70mm screenings.

Obviously the piece will need to be further revised to account for the upcoming “Licorice Pizza” run. Let us know, please, if you believe additional omissions or corrections are needed.

I added my photo of the 2014 70mm leaflet which does not mention L of A or West Side Story. The theater closed in March 2020 due to Covid, for the rest of the year.