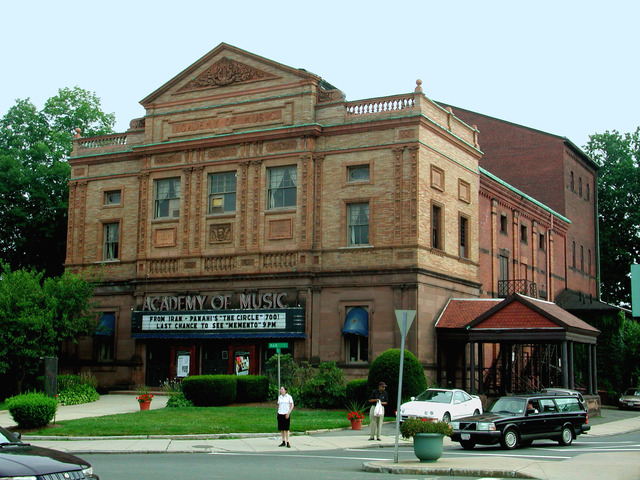 This classic turn of the century music hall turned vaudeville house was reborn as the home of first run movies in collegiate Northampton. In the 1940 and into the 1950’s it was operated by the Herman Rifkin Theaters chain.

The theater’s classic beauty and sheer size (it’s the largest single screen movie theater in the area) have made it a landmark in Northampton.

There was a front page article on the whole deal with the removing of moving pictures from the venue on Friday. Can’t access it online without paying for subscriptions. Basically, they talked about the firing of the 12-full time workers and where the new ED came from and how she got them out of a whole lot of debt, etc. Then it alluded to some bad things and that’s where it cut off (I didn’t want to spend money on a paper) as I was biking through and didn’t want more weight.

Believe that the city is kicking in $50,000 as a temporary fix. The local public television station is also involved. I have no doubt that the taxpayers of Northampton and contributors to PBS will see their money put to good use.

Here is an announcement from their vision statement on their Website:

In January 2007, the Board of Trustees for the Academy of Music unanimously voted to discontinue the nightly showing of first-run films, an action that had been recommended by an independent theater consultant a few years prior. Faced with lower-than-expected revenues from movies and donations during 2006, board members made the difficult decision to halt the films in order to avoid amassing further debt. Live performances, however, would continue unabated at the 800-seat theater. In making its decision, the Board of Trustees pledged to seek public input as to the types of programming community members would like to see in the historic building at 274 Main St. The Board also sought to initiate a discussion about the relationship between the Academy and the City of Northampton, which owns the building, and between the Academy and other community arts organizations.

The wonderful new movie documentary, Young @ Heart, about a group of senior citizens from the Northampton area who give great performances of rock music, is worth going out of your way to see. The performance sequence at the end of the movie takes place on the stage of the Academy of Music and includes, in addition to the songs, many shots of the audience and the interior and exterior of this historic theatre.

A new marquee was dedicated a couple months ago. It’s a reproduction of a 1920s era marque albeit with LED lights. Looks nice, and easy to read! The interior lobby and auditiroium were restored around 1980 and still looks great to this day! They still have live performances and occasional movies.

As the Academy, this theater is listed in the 1927 Film Daily Yearbook as having 1000 seats and open 6 days per week.

The Academy of Music’s official web site gives a brief history of the theater, but fails to mention the name of the architect, William C. Brocklesby. Brocklesby (1848-1911) studied architecture in the offices of Richard Upjohn, who was one of the leading American architects of the early 19th century.

Brocklesby later established his own practice in Hartford, Connecticut, and designed many historically significant buildings in New England. His other works in Northampton include the Forbes Library and several buildings on the campus of Smith College.

The Academy of Music, formally opened in May, 1891, is an early example of the Renaissance Revival style which, after the World’s Columbian Exposition was held in Chicago in 1893, became the dominant style for public buildings in the United States for almost four decades.

The Academy of Music is listed on the National Register of Historic Places.

Recent article in the Daily Hampshire Gazette about the upcoming restoration of a historic curtain at the Academy.

I was lucky enough to perform in this theatre back in the spring of 2008 when I was in high school. The Pioneer Valley Performing Arts Charter School I attended used to do their annual spring musical here, and 2008 – my freshman year – was the last year that happened. The theatre was beautiful but I had no idea it was also a cinema. I was only a background player so I spent a lot of time “backstage,” or in the case of this theatre, “under-stage.” It was quite spacious and comfortable and they even had a TV set up down there. The cast and crew would have DVDs playing on it for people to watch when they weren’t on stage.