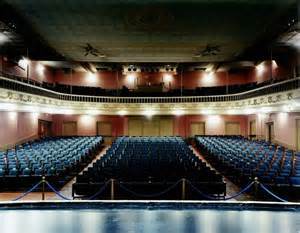 The Barre is a great old theater in the continual process of being restored as funding allows.

At the time considered the finest in Vermont, the Opera House hosted major name acts and community events for 45 years, including hosting Helen Keller, two Presidents, and Tom Mix (and his horse).

During the 1930s and 40s, the Opera House functioned primarily as a movie theater, until more modern theaters in town forced the Opera House to close the doors in January, 1944.

It sat vacant for 40 years, until community support in the 1970s started a movement to restore the theatre. It reopened in 1982, and has been steadily working towards a complete restoration and renovation since (for a live theatre venue - not a movie house.)

The late Donald C. King of Washington DC, author of the recent book “The Theatres of Boston – A Stage and Screen History” (McFarland), was an employee of the E.M. Loew theatre circuit of Boston beginning in the late-1930s. In December 1941, at the age of 20, he was sent by Loew to Barre as the new manager of the Barre Opera House. He like living in Barre and he loved the old Opera House ! He mentioned to me that on certain Saturdays, in addition to movies, there was a Saturday Night Barn Dance-type show on stage. He worked at the theatre for about 6 months until he enlisted in the US Army in mid-1942.

I performed on the stage of the Barre Opera House in the summer of 1985. The Atlantic Theater Company production of THE HOTEL PLAY by Wally Shawn, directed by Sheila Welch. This play was part of Atlantic’s inaugural summer season of plays in Vermont. Other venues were located in Montpelier.