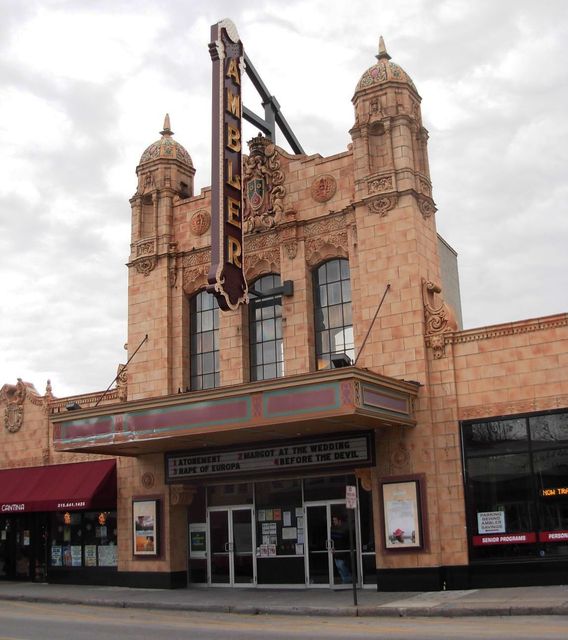 The Ambler Theatre was opened by its owner Warner Bros. on December 31, 1928, with the movie “Our Dancing Daughters” starring Joan Crawford. The town of Ambler is in Montgomery County, 15 miles northwest of Philadelphia.

An exuberant Spanish Colonial style architecture was employed to create a magical facade with terra cotta, spacious lobbies (entry lobby, main lobby, vestibule lobby, then foyer), an ornate auditorium with 1,228 seats, and a Gottfried pipe organ (which is long gone). The builder, Phillip Harrison, previously built the Seville Theatre (now Bryn Mawr Theatre) and Lansdowne Theatre, which may explain the Spanish Colonial similarities. Prior movies in Ambler had been shown in an opera house, a second story Civil War era theatre.

Due to the competition from TV and the multiplexes, the Ambler Theatre was no longer viable to continue as a for profit theatre with mainstream movies and ceased showing 35mm films in 1970 when local theatre operator Budco Theatres could no longer afford to operate the theatre. By this time the auditorium’s side walls and the front part of the ceiling was draped over. From the 1970’s until 1997 the Ambler Theatre was operated as a Christian cinema, showing films in 16mm including “The Robe”. The Ambler Theatre closed again, waiting re-use. The Christian group sold the theatre in 2001 to businessmen, who in turn sold the theatre to the nonprofit Ambler Theatre, Inc.

Built in the former rear of the orchestra seating area were two ‘black-box’ stadium seated auditoriums, equipped with digital surround sound. Auditorium 2 has 150 seats, a 25ft wide screen and is equipped with 2k digital and 35mm projectors. Auditorium 3 has 110 seats, a 21ft wide screens and 2k digital projection. The Ambler Theatre reopened February 28, 2003, with those two auditoriums showing the movies “Nicholas Nickleby” and “Real Women Have Curves”. Renew Theaters, Inc. led by John Toner, which had a success in revitalizing the County Theatre, Doylestown, PA and continues to have its headquarters in Doylestown, was selected to oversee the renovation and operation of the Ambler Theatre.

As the original 30 foot towering vertical neon sign had been demolished in the late-1960’s, an exact replica was constructed by Bartush Signs and funded in part by a Keystone Grant from the Pennsylvania Historical and Museum Commission. The neon tower was installed in September, 2005 and officially lit on October 21, 2005. A replica of the historic marquee, was installed in April 2009. The marquee was made a little shorter than the original so it would not be hit by vehicles.

Renovation of the original front section of the auditorium began March, 2007. It reopened October 5, 2007 with the film “Into the Wild”. This auditorium (#1) has 4 k digital projection and 7.1 Dolby Digital surround sound. The original proscenium arch opening hosts the large movie screen (30 feet wide for ‘scope films), ornate decoration on the side walls, organ lofts and stadium seating for 280 people. This auditorium has a ceiling with what looks like wood beams, but in reality they are made of plaster. In October 2009, the non-original concession stand was replaced by a new, ornate stand inspired by the design on the auditorium’s organ lofts. In 2010, replicas of the two original decorative movie poster display cases were installed at the front of the theatre.

The Ambler Theatre reopening received in 2008 a Grand Jury Award from the Preservation Alliance of Greater Philadelphia. Photographs showing historic sites of Ambler line the last portion of the theatre’s lobby but the best way to celebrate the town’s architectural heritage and the town’s recent renaissance is to experience a movie in the revitalized, reopened Ambler Theatre.

Turly a landmark in both theater preservation and restoration. While the two “black box” theaters are well-designed, it is the main theater, literally built within the walls of the original structre, that is a true “show stopper.”

Saw “Crazy Heart” last night and was impressed by the caring staff, solid projection and dolby digitial sound and a very quiet audience, the Ambler is now my #1 choice for moviegoing in the Philly area.

Theatre Historical Society visited the Ambler last summer as part of its 2009 Conclave in the Philadelphia/Baltimore/Wilmington area. The group was highly impressed by not only the careful preservation of the theater but the staff’s knowledge and respect for the theater’s place in history. It was certainly a star of the 5 day tour!

Don’t remember; with the cold, ice and the snow, I don’t think I looked up! That said, the lower marquee (movie titles)was illuminatred in a beautiful amber (or should that be “ambler”?) glow.

With regard to the previous post about the Theatre Historical Society: Note to the other non-profits trying to rehab community theaters (this would be you, Bryn Mawr Film Institute), visit this theater to witness how a small town can be revitalized by a well-run, well-designed movie house that caters to adults looking for an escape from the multiplex.

The pylon (aka vertical) is working at the Ambler.

Note, all three theatres currently feature Kinoton FP30E Premiere projectors with 3-wing shutter mode so the images should be flicker-free!

The folks that run the Ambler (and County theatre in Doylestown) really do try to do the best by the movies they show.

My step-father installed the original organ when the theater was built. The management asked him if he would be the projectionist. He said, “No!” But they talked him into doing the job until they found a full time person. THEY NEVER DID! He worked there until her retired. His name was Charles H. Becker.

Chuck, I didn’t set it that way so you shouldn’t receive that message. Recently a London England group asked me to include a couple photos, so they could see them. The Ambler photos that I posted there I have since pisted to photos on this page. I will try to double check settings later, if I can find them!

Last weekend, I enjoyed 4k restored Lawrence of Arabia, in 5.1 surround sound at Ambler’s main auditorium. The curtain isn’t used often but it was opened after the overture music. Showing again 7 PM this Wednesday! Check out the wonderful lineup of classics including Gone with the Wind in August.

There are three photos of the Ambler Theatre on this page of the web site of JKR Partners (formerly JKRoller Architects), the Philadelphia architectural firm that designed the renovations.

Linkrot repair: After changing their name again (it is now JKRP Architects) the firm that designed the renovations of the Ambler Theatre also reconfigured their web site. The photos of the Ambler are now on this page.

In case nobody has heard, the Ambler will be running the first of their “Film-Festivals” using genuine film! They had 35mm reinstalled in their #2 theatre.

Check their website: http://amblertheater.org/ for specific movies and showtimes.