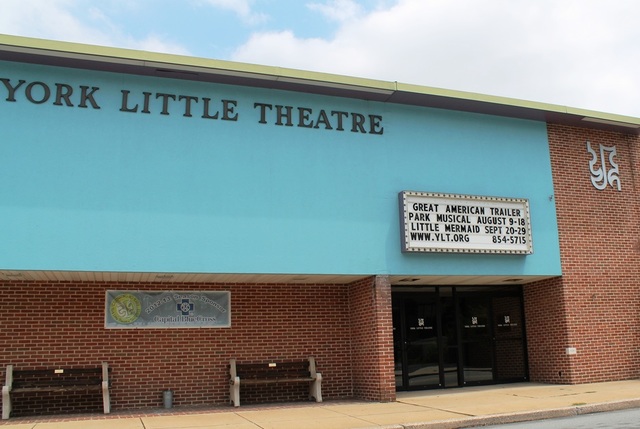 The Elmwood Theatre in East York, PA. was opened on June 3, 1949 with June Haver in “Scudda-Hoo!, Scudda Hay!”. It was considered an ‘Art’ theatre, at one time owned by R. Moore. Since May 1956 it has been the home of the York Little Theatre Company.

The Elmwood Theater was at 27 S. Belmont St. in East York. The neighborhood is called Elmwood and is on either side of I-83 off of Market St. The theater is about a half-block south of Market and is in Springettsbury Township. The Elmwood Theatre still exists, as the home of York Little Theatre, as it has been since the movie theater closed in the early 1950s. The building has since been expanded and remodeled, and any exterior similarity to the old movie house was eradicated long ago.

I don’t know much about the Elmwood, other than it was an art/foreign film theater and lasted only a few years, probably not more than a decade if that, in the late 40s and 50s. York was not then and still is not a market for art/foreign films. Why they didn’t switch to a more mainstream format I don’t know, but perhaps the competition from bigger theaters and TV was just too great. Judging by the auditorium at YLT, the Elmwood might have had 600 seats or so. That’s about all I know about it. I’ve never even seen a picture of it.

Thanks for your information. I never knew that was at one time a movie theatre. Since I was born in 1947 the York Little Theatre is all I remember that being when I got old enough to take notice to things and became interested in movie theatres.

Here is the official web site of the York Little Theatre.

This story has modern-day photos of the Elmwood – exterior and interior pictures: http://bit.ly/1ObYAvI- The old Elmwood is alive and well at York Little Theatre in York, Pa.

This opened on June 3rd, 1949 along with the Collinsville Drive-In. Grand opening ad posted. It stopped showing movies in 1958.